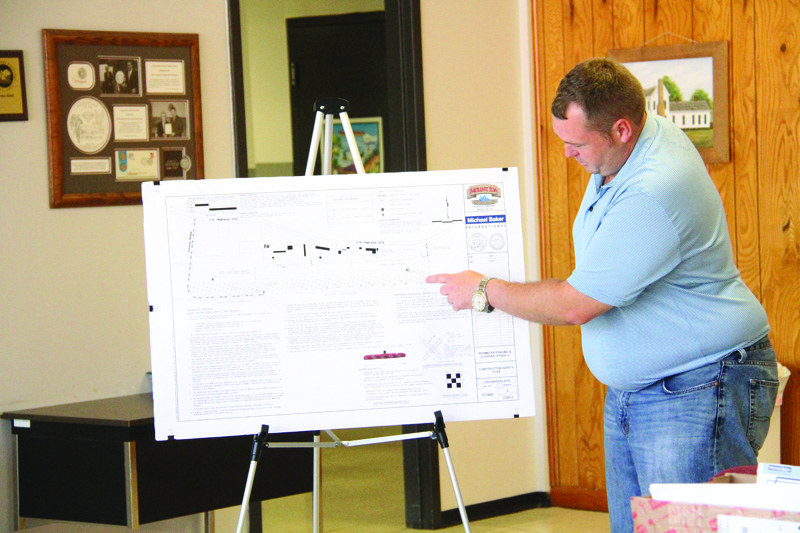 MOUNT IDA – The city of Mount Ida and Bearce Airport are about to take a huge step in the completion of the perimeter fencing around the local airport thanks to a Federal grant from the FAA.
Members of the Arkansas delegation to the United States Senate and House of Representatives announced the grant last week and the city held a pre-construction meeting Friday with representatives from Michael Baker’s engineering firm and the contractors that will be working on the project.
The project is phase two of a three phase project to encompass the airfield with secure fencing.
On hand for the meeting was Mount Ida Mayor Jo Childress; Acting Airport Director Tracy Smith; Barry Craw with the Mount Ida-South Fork VFD; Duane Johnson and Matt Wallis representing Baker’s engineering firm; Billy Briggs with United Fence Company; and Brent Montgomery and Josh Smith with Envirotrac Safety and Erosion.
The FAA grant, which earmarks $220,000 for the project, will pay 90 percent of the cost and the city and airport will be responsible for the rest.
The meeting was a preliminary meeting that allowed Wallis and Johnson to explain the project to the parties involved and to give all parties an opportunity to provide input and information before the project began.
The project, which has a price tag of $186,746.50, will consist of two phases. The first phase will consist of clearing and grubbing areas which have grown up on the property. Most of the work will take place along the south side of the airstrip, which will need to be done before the new fence can be erected. Wallis explained that the project, which will be carried out by Envirotec Safety and Erosion, is a 30 day project.
The landing strip will be closed during the 30 day period. Briggs was ordered to install barricades and X’s to mark the closed runway when the first phase begins.
Smith told the contractors that the south property was extremely rough with several ditches and ravines, which has made it almost impossible to keep the area clean. He asked if they could level it enough for him to get a truck, or UTV along the fence once it was installed. He stated that this would help in his efforts to keep weeds down once the project was finished.
Montgomery, stated that they were familiar with the property and tried to leave an area level enough to bush hog if possible.
Mayor Childress and Smith asked if the contractors could dump excess dirt and debris in the hole on the north side of the property. The city and the airport have been trying to fill the hole for sometime. Montgomery indicated they could and asked about stumps.
The Mayor answered, “We will take what we can get.”
Smith addressed the issue of dumping stumps. He explained that he understood the inclusion of stumps could cause foundation problems in the future if structures were built in that location. He told Montgomery that there were already stumps in the hole and didn’t know of any plans to build on that area once it was filled.
Mayor Childress also revealed that the city has plans to clean the area along the North fence soon.
Wallis also stated that there was a small area on the north of the runway that the FAA had requested to be cleared. He stated that it was not a problem yet, but small trees in that location posed a future obstruction to lights at the airport.
Envirotec is contracted to clear 25 acres and the runway will be opened at the completion of the cleaning and grubbing phase. Wallis added that phase two could begin before the completion of phase one if the area around where the fence was to be installed had been cleared.
The second phase of the plan is a 60 day project that will install a fence around the south and east borders of the airfield.
The fence will be erected 10 feet inside the property line and will be seven feet tall with one foot of barbed wire at the top.
Everyone agreed that any excess fence would be used to extend the fence beyond what was listed on the project.
The parties discussed taking some of the money set aside for the clearing and grubbing and putting it toward additional fence. Smith stated that the clearing and grubbing was more important to him. Mayor Childress added that she felt the perimeter fencing could be completed in one more phase and everyone agreed to leave it as is for now.
Mayor Childress asked if the project would infringe on any of the neighboring businesses and she was assured it would not.
Wallis announced that he would file a notice to proceed on September 14 and work could proceed in 10 days following the filing.
Envirotec is expected to begin the first phase of the project September 24.