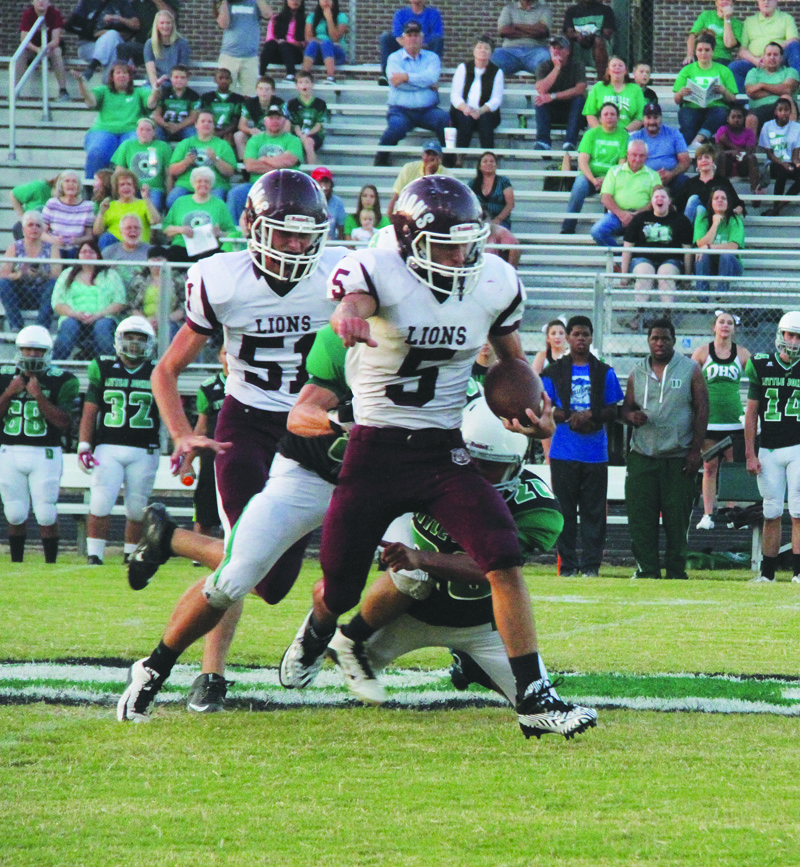 Second half adjustments by defensive coordinator Jackson Guerra helped the Mount Ida Lions roll to a 56-32 victory over the Danville Little Johns last Friday night.
Mount Ida dominated in every positive offensive category. The Lions ran 54 plays to Danville’s 43, doubling their first down output 18-9.
Mount Ida amassed 477 total yards with 170 coming through the air and 307 pounded out on the ground. Danville accumulated 213 yards, all on the ground. The Lions lost three fumbles while Danville lost two.
TJ Wilson was 7-9 through the air for 170 yards and four touchdowns.
Jesse Lowry had six catches for 145 yards and three scores, while Anthony Spurling caught one for 15 yards and a touchdown.
Austin Hickman led all rushers with 16 carries for 194 yards and two touchdowns. Lowry had five carries for 33 yards and a score, Cody Robertson had three carries for 21 yards and Cade Helms had one for six yards.
Danville opened the game with the ball and was able to move the ball to midfield before the Lion defense forced a punt.
The Lions only needed two plays to find the endzone with Hickman taking his first touch of the year 75 yards for a score with 9:36 to go in the first quarter. The PAT was just wide and the Lions held an early six point lead.
Danville answered with an 84 yard kickoff return for a score by Jamey Holbrook. The PAT was good and the Little Johns held a narrow 7-6 lead with 9:24 to go in the opening quarter.
The game started to look like it might be a game of returns when Lowry took the ensuing kickoff 90 yards for Mount Ida touchdown with 9:10 left in the opening quarter. He carried the ball in for the two point conversion to give the Lions a 14-7 lead.
A fumble recovery by Caleb Jones gave the Lions the ball in Danville territory, but Mount Ida was forced to punt.
The Lions started their next series on the Danville 41 after forcing a punt. It took five plays to move the ball inside the red zone. One play later Wilson and Lowry connected for a 15 yard touchdown reception. The PAT by Tyler Allenbrand was good, bumping the Lions’ lead to 21-7.
Danville settled in for the long haul on their next series, launching a nine play drive which ended in a 20 yard touchdown run by Holbrook. The PAT was no good and the Lion lead sat at 21-13 at the 9:40 mark in the second quarter.
Both teams went back in forth over the next four minutes of the game before Mount Ida caught a break when a Danville player touched a punt. The Lions fell on the ball and took over on the Danville 32 yard line. Hickman and Jones combined for 15 yards of offense on the ground before Wilson and Lowry combined for a second touchdown reception, this time from 17 yards out. Mount Ida held a 27-13 lead with 3:06 left in the half.
Holbrook answered for the Little Johns, this time with 53 yard run for a score. The PAT was good and the Lion lead sat at 27-20 with 38 seconds to go in the half.
The Lions wasted no time quickly moving the ball to their 48 yard line. Wilson found Lowry open once again and the result was a 52 yard touchdown reception. Lowry carried in the two point conversion to give the Lions a 25-20 lead with 13 seconds to go in the half.
The Lions opened the second half with the ball on the Little John 45 yard line. Mount Ida marched downfield and ended a eight play drive with a 10 yard run by Lowry. Allenbrand’s PAT was good and the Lion lead was 42-20 with 8:20 to go in the third quarter.
After a Little John punt, Mount Ida went 59 yards in eight plays to score on a 25 yard touchdown reception by Anthony Spurling. The PAT was good and the Mount Ida lead inproved to 49-20.
Austin Hickman rounded out the Lions’ scoring with a 25 yard run with nine seconds to go in the third quarter.
Danville would add 12 points in the fourth quarter after Coach Mike White turned the game over to the second squad.
Mount Ida moves to 2-0 on the season and will host Magazine Friday. Homecoming festivities begin at 5:30 p.m. and kickoff is scheduled for 7 p.m.