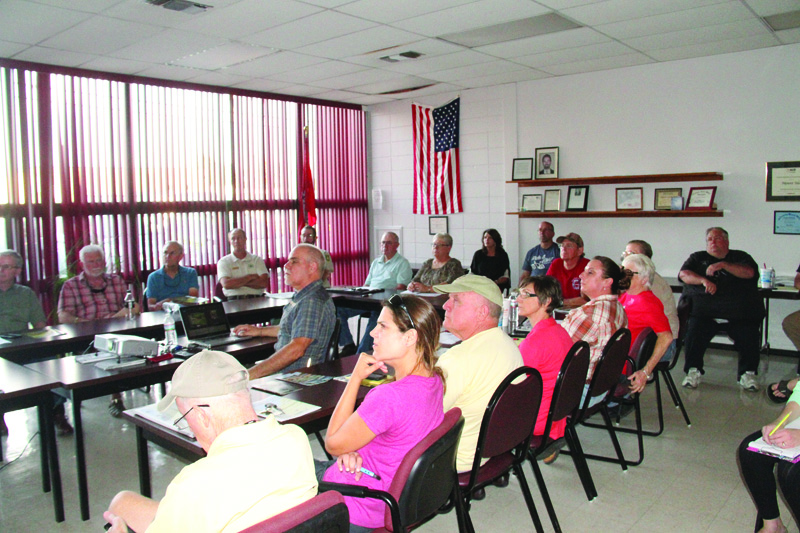 MOUNT IDA – Local business people and trail enthusiasts filled the meeting room at the Mount Ida Civic Center, Tuesday, September 22, to discuss the rise in mountain biking as a tourist industry and how Montgomery County can better provide for those who come to ride the local trails.
Steve Schneider, a regional representative for International Mountain Biking Association (IMBA), was onhand to give a presentation on mountain biking and its growth as a vital part of the tourism industry.
Schneider began by giving a background on IMBA, which began in 1988. It has since grown to include 40,000 members across all 50 states and 30 countries around the world. Their goal is to protect, create and enhance great mountain bike experiences.
IMBA offers a host of services for mountain bikers and trail groups, including trail care crews. Schneider reported that a trail care crew was currently available for Arkansas through IMBA thanks to a grant provided by the Walton Foundation. He also pointed out that IMBA was working with government agencies to promote mountain biking as a vital part of the tourism industry.
He explained that surveys show mountain bikers tend to be male around the age of 38. He went on to say that 73 percent of mountain bikers have college degrees and the mean family income for a mountain biker is just over $100,000 per year.
He stated that they are heavy travelers who like to stay in upscale hotels. They tend to be executives who often have a home office. One of the most encouraging things about mountain bikers is they tend to be family men, which means they often include their families in their trips.
Schneider stated that one in five Americans 16 years of age and older own a mountain bike. There are now one and a half times more mountain bikers in the United States than golfers.
He pointed out that the cost of constructing a mountain biking trail compared to other sports facilities is low and many municipalities are building them at city parks.
Schneider stated that most bikers want a single track trail, which is a narrow trail that only allows for single file riding.
Montgomery County is the perfect terrain for mountain biking and is the only county in the world that can boast of three Epic IMBA Trails within its borders. Schneider explained that trails have to meet a strict criteria to be named an Epic Trail by IMBA. Montgomery County is home to the Ouachita Trail, the LOViT Trail and the Womble Trail.
The trails are also included in the Hot Springs Ride Center destination. He explained that a ride center took into consideration accomodations available for mountain bikers.
Schneider pointed out that the biggest need Montgomery has regarding serving mountain bikers may be shuttle services. He explained that the trails in the area are directional trails and much like the canoo services in the area, a shuttle service to and from the trails would be a big help to visiting bikers. A handful of businesses mentioned that they did offer shuttle services. Blue Bell Store, Echo Canyon and Ouachita River Haven stated that they provided shuttle services for mountain bikers.. Schneider stated that it was the perfect job for a retiree. When someone needs a ride, they just give them a call.
He also stated that the area needed an outdoor outfitting business that was staffed with bicycle repairment and equipment.
Guides, maps and signs were also mentioned as needs. He pointed out that one of the biggest obstacles Montgomery County faces when it comes to receiving a ride center status is amenities for riders. He acknowledged that there were some nice places to stay, but the lack of resturants and brew pubs and other such types of entertainment prevented the county from receiving ride center status.
Representatives from ARCO suggested that they might work with IMBA to create a regional ride center which included Polk County as well.
Schneider stated that mountain biking season runs from October to April or May, which is traditionaly the off season for tourism in the area. xxxx Carr of Shangri-La Resort stated that they had been catering to bikers for some time and it had been a huge boost to their business. Representatives from Mountain Harbor Resort shared similar successes.
Schneider stated that with mountain bikers being very active on social media it was important for area businesses and organizations to actively promote local trails on social media.

Robert Cavanaugh stated that the Ouachita Trail is home to the Ouachita Challenge. The race fields 500 riders every year, which he added brought a lot of money into the area. He challenged the Mount Ida Area Chamber of Commerce to get involved in the race next year.
Schneider stated that there is a lot of buzz in the mountain biking community about Montgomery County and their three Epic Trails.
As talk turned to local needs, Jennifer Sweeney emphasized the importance of tourism for the local economy. She reported that in 2013 there were just under 10,000 people living and working in Montgomery County. In that same amount of time over 100,000 tourists visited the county. For many years Montgomery County has been known for Lake Ouachita and the local crystal mines, but it is evident that mountain biking is a growing part of the local tourist economy.
Trail keepers stated that the community needs to recognize the value of mountain bikers when they come into the area. They also stated that they needed more volunteers to help maintain the trails.
They key is for area businesses and organizations to work together to reach the mountain bikers where they are. Once you draw them to the local trails then we have to make sure they have a great experience so they will come back.
All three of the Epic Trails have pages on Facebook. You can also go to the Mount Ida Chamber of Commerce Facebook page for more information.
For more information on IMBA, or mountain biking in general go to www. imba.com.