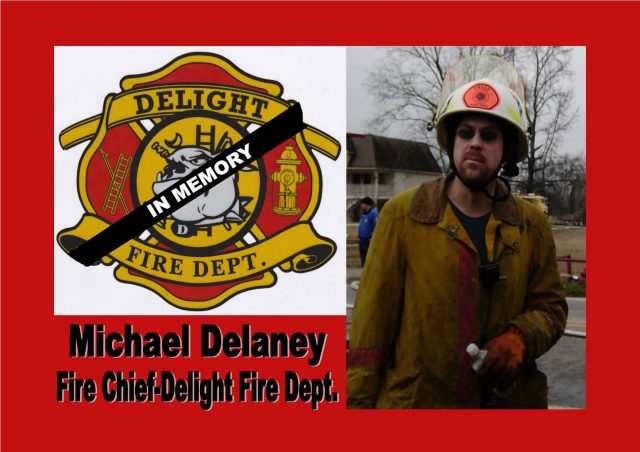 The city of Delight is mourning the loss this week of its fire chief and a community leader.

“Michael will be severely missed by the city and people of Delight as well as the surrounding areas.”

Delaney, a longtime member of the Delight Rural Fire Department, had served as fire chief since 2006. Murfreesboro Fire Chief Alan Walls had worked with the neighboring fire department and Delaney for many years

“It’s a shock,” Walls told The Nashville Leader Monday morning. “We always had a good working relationship and Michael always had a love for the fire service and the general helping of people.”

Delaney, the son of the late William Delaney and Carrietta Delight of Delight, graduated Delight High School in 1987. He worked for International Paper for a time after graduation and then went to work at Bumper to Bumper auto supply store in Delight, according to his sister, Michelle Delaney of Delight.

In 1998, Delaney and business partner, David Brian Hendrix of Antoine, opened their first 10-Minit Lube in Arkadelphia. A Nashville location was added in 1999 and another 10-Minit Lube opened in Mena around 2011.

“We were business partners for close to 20 years,” Hendrix said. “During all that time, we never had a single disagreement or cross words, and I think that’s a testimony to the type of person Michael was.”

Hendrix said Delaney rarely told anyone ‘“no” who was in need of help and was always eager to lend a hand. “That was his calling, really, helping people,” Hendrix added.

Funeral services will be held Friday, Sept. 18 with a visitation scheduled from 5-8 p.m. at Latimer Funeral Home Chapel in Nashville. The service will be held Saturday at 10 a.m. at the funeral home chapel with Jim Henderson, Roger Genung and Pat Davis, who is described as Delaney’s “special second father,” will officiate.

Michelle Delaney said her brother will then be laid to rest at the Delight Cemetery with a full “firefighter’s funeral” which will include a special Honor Guard presentation and a bagpipe rendition of “Amazing Grace.”

The family has requested that, in lieu of flowers, donations be made to the Delight Rural Fire Department, 5125 Highway 301 South, Delight, AR 71940 in care of Betty Rhodes.