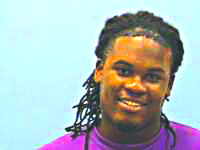 NASHVILLE – A man who had previously been arrested for theft by receiving is back in the Howard County jail after nearly a year of failing to appear to answer those charges.
According to statements from a representative of the Howard County Sheriff’s Department, Anthony Levelle Thomas, Jr., 21, of Texarkana was transported to the Howard County jail Wednesday afternoon with his bond revoked after failing to appear for court on September 3 of last year.
The initial arrest by Nashville city police came after city officer Justin Garner reportedly saw a vehicle that had been reported stolen from Texarkana at a local convenience store in Nashville. He reportedly waited outside the store while the three occupants of the vehicle went into the store, and after an hour of waiting entered the store himself to find the three had fled. Thomas was reported as having been identified from store security video as one of the occupants of the vehicle, later confirmed by the store clerk as well.
Thomas was arrested and granted bond in the case, but failed to make a court appearance, according to police records. When he was arrested in Miller County in June on an unrelated charge, officials from that county notified Nashville city police, and a judge rescinded Thomas’s bond. After being released by Miller County, Thomas was transported back to Howard County, where he awaits trial.