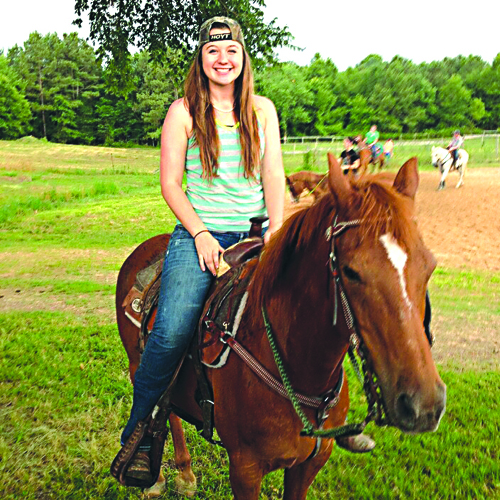 NASHVILLE – In less than 20 seconds it is all over, but with the crowd yelling and the lights shining bright in the arena, that 20 seconds can last an eternity.
In the mind of Nashville High School Senior Rachel Bradshaw, though, it is just her, three barrels and her horse Trigger. Bradshaw is a rodeo barrel racer who competes in places from Nashville to Prescott and from Arkadelphia to Texarkana. Barrel racing is a dominantly female sport where the rider goes around three barrels placed in the center of the arena in a cloverleaf pattern. The rider enters the arena at full gallop and whoever completes the fastest is the winner.
For Bradshaw, barrel racing was not just a fluke, but a family affair. Her grandmother was the one who inspired her to begin competing.
“My grandmother did it when she was young and I started at the Cowboy Church here in Nashville. My little cousin also used to barrel race with the South Central Horse Show Association and when she got out of it I got started with them. I don’t know how it happened that way,” Bradshaw explained. Bradshaw competes for belt buckles, halters and saddles with the South Central Horse Show Association.
“My most memorable moment was at a rodeo series at the church where I placed highest in barrel racing and was able to win a belt buckle,” Bradshaw said while showing off the prize.
Bradshaw competes regularly with the association, earning two third place finishes just last weekend.
“I am not trying to toot my own horn but I don’t think I am bad at barrel racing,” she said.
Yet even after five years of being on the back of the horse Bradshaw said she still gets nervous before a big race.
“It is a huge adrenaline rush. When you start you get shaky – I still get shaky sometimes if it is a big barrel race against really good people, I still get really nervous,” she explained.
For Bradshaw this is more than just an after school hobby. Barrel racing is something she plans to pursue in college and it may even help pay for her schooling.
“At SAU probably, I want to be on the rodeo team and get rodeo scholarships,” she said.
For anyone who is interested in doing barrel racing Bradshaw’s advice is to do your research.
“I started looking it up on the internet and through Facebook I was able to get started with a group,” she said.
Bradshaw will kick up dust in at her next competition also in Arkadelphia where she will try and better her two previous third place finishes.