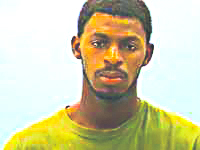 NASHVILLE – A report from the Arkansas State Police’s Crimes Against Children division to the Nashville Police Department has resulted in the arrest of a Lewisville man.
According to statements made by police investigator Larry Marion, the Crimes Against Children report detailed a complaint from a 15 year old girl about alleged sexual contact with an adult.
The report allegedly named Jamar Antonio Ellis, 23, of Lewisville, as the person who had initiated sexual contact with the 15 year old on three occasions in her home. The two had allegedly made initial contact online.
Ellis, who is reported to be a registered sex offender, was questioned about the allegations of the report when he made his periodic check-in with his parole officer in Hope, according to Marion. Ellis is alleged to have admitted to the reported sexual contact with the underage girl at that time, after which he was arrested on a charge of sexual assault in the fourth degree and transported to the Howard County Jail, where he is being held on a $25,000 bond.