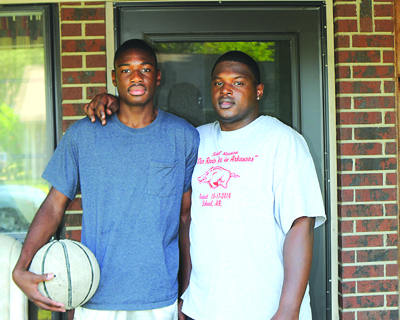 MINERAL SPRINGS – A family tradition in basketball is continuing as a local student is following his father’s footsteps on the boards into the Amateur Athletic Union.
Keshaun “Bebop” Davis, a rising senior at Mineral Springs High School was invited to join the AAU team based out of Texarkana last month, just as his father, Shaun Davis, was invited to join an AAU team based out of Caddo Hills and then playing for the Arkansas Lakers 21 years ago.
The Amateur Athletic Union is an organization dedicated to amateur sports which was founded in 1888, to establish standards and uniformity in those sports and to prepare athletes for the Olympic games, according to information provided by the group. They go on to state that they represent more than 670,000 participants in amateur sports.
Shaun Davis, beginning his run with AAU in 1994, had been singled out for invitation to the organization after his performance with the Mineral Springs Hornets as a shooting guard and small forward in seasons that saw them consistently going into regional play after the regular season, including a stunning victory over then-powerhouse basketball team Saratoga.
The 1997 Mineral Springs graduate disclosed in a recent interview that though he was initially included in a now-defunct AAU team based out of Caddo Hills, he quickly got picked up by the state AAU team, the Arkansas Lakers, and went on to play against teams from as far as Detroit and North Carolina, with several players who went on to notable college or NBA careers.
He himself did not play basketball, but rather went on to play football for the University of Arkansas at Pine Bluff, and then saw much of his ability to play lost to a stroke in 2005.
Shaun Davis was able to keep a hand in sports despite that, acting as a peewee basketball coach for his son’s team just the following year. He reported with pride that Keshaun’s team lost only two games that season, the start of another basketball career of note.
Keshaun Davis, whose high school team finished their season in the state quarterfinals this year, was invited to join the AAU team based out of Texarkana this spring. He noted that both his parents were outstanding basketball players in their own right, and that the early start he had learning the game from about the age of nine has been instrumental in any success he has.
Bebop, as he is known around campus, says that aside from his parents, he has studied college and NBA footage to learn technique and find inspiration – singling out Kevin Durant as a role model because of the professional player’s reputation as having kept true to his religious faith while achieving success on the basketball court.
This is not Bebop’s first time in AAU, having succeeded in a try-out competition for a junior team two years ago. Entry into senior teams are by invitation only, and he stated that he was honored to have been asked to join by the coach of the Texarkana based team.
The Texarkana team went to Memphis a few weeks ago to play a six round tournament, which they nearly took, losing the final game by only a single point.
Other tournaments are expected throughout the summer, which Bebop will participate in between attending basketball camps in Russellville and Searcy.
Bebop said that he did not know about his father’s AAU experience until recently, when he found a clipping from The Nashville News which detailed his time with the organization.
Shaun Davis said that he is not surprised by his son following him into the amateur athletic program, stating, “The sky is the limit for him. I think he’s got the skills for the next level.”