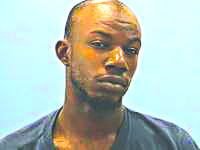 NASHVILLE – A local man was arrested Thursday in connection with an alleged burglary reported June 11.
According to a statement issued by Assistant Chief Amy Marion, city offiers took 25 year old Freddie L. Robinson into custody after an area woman reported that two Playstation 4s were missing from her residence along with a small amount of cash.
“During the investigation, the Playstations were located at pawn shops in Ashdown and Texarkana,” Marion said in the statement. “They were pawned by [Robinson].”
Officers subsequently interviewed the suspect and arrested him on charges of residential burglary and theft of property. He was transported to Howard County Jail, where he remains on a $50,000 bond.