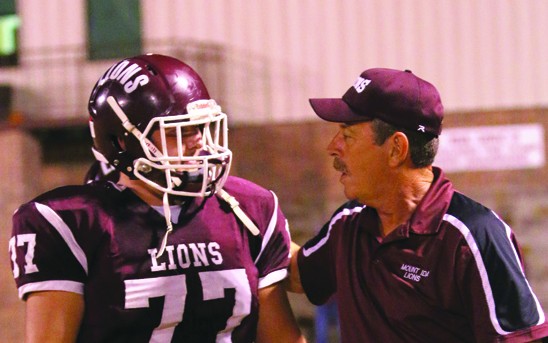 Through the years of Mount Ida football many things have changed, but one thing has remained the same. Regardless of his role, Jerry Sandlin has been a part of the Mount Ida Lions since the first practice in 1968.
Whether it be as a player, fan, or coach, he has not only been a part of the football program, he has attended all but one game in the history of Mount Ida football.
In a recent interview Coach Sandlin, as he is known by most, reflects on the program and what it means to him as he prepares to make yet another transition. This time he is stepping off the sideline as he retires from coaching and entering life as a fan once again.
“A lot of people have asked me if I think I will miss it. That is crazy, I already miss it.” Sandlin stated when talking about retiring from coaching.

A 1971 graduate of Mount Ida High School, Jerry remembers the first year of Mount Ida football. The sport was gaining ground in the area and the Lions were among a host of new teams in the area which included schools such as Mountain Pine and Lake Hamilton.
He joked that you wouldn’t believe that Mount Ida and Lake Hamilton were about the same size back then. He also pointed out that he felt that the birth of football at Mount Ida and Mountain Pine had helped cultivate a rivalry between the schools that continues still.
The early days weren’t easy with Mount Ida struggling to earn a win. Sandlin’s head coach, Herschel Ray was a graduate of Kirby, a school not known for its football prowess.
He stated that they learned as they went along and fondly remembered the first time the Lions attempted a punt in their opening matchup against Bauxite. The team’s punter trotted out on the field prepared to kick the ball without a shoe on his kicking foot.
It was at that time that we found out that you had to wear a complete uniform to play football even in 1968.” He joked.
He said that they learned as they went and so did the coaches. He quickly pointed out that he wasn’t speaking bad about Coach Ray, but wanted to point out that it was a learning experience for everyone.
“Mr. Hershel Ray was a great man and a great coach and he got us playing like we was supposed to.” Jerry stated.
He also talked about a halftime incident in a game against Horatio.
Just before halftime, Mount Ida punted the ball and the horn went off signaling the end of the half. The Lions trotted off the field as Horatio returned the punt for a score.
“We thought it was halftime.” He laughed.
The first Mount Ida Lion victory came against Mena’s “B” team. He pointed out that Mount Ida played Mena’s “B” team a second time later in the year and Mena played some starters so the Lions to assure a victory against the young Lions.
Jerry played wide receiver and defensive end for three years at Mount Ida before leaving for college, making his first transition from the sidelines to the bleachers.
He would return each Friday night to cheer on the young men in the maroon and white. After finishing college he went to work for the forestry service.
As he watched the legacy he helped create grow he felt a desire to become more involved once again. He returned to school and earned a coaching certificate, which allowed him to return to the sidelines as an assistant coach for the Lions.
He had coached pee wee football and baseball after graduating high school and joined the Mount Ida coaching staff in 1989. Coach Sandlin has worked with four head coaches and felt it an honor to have coached the current head coach, Mike White when he was in high school.
Jerry stated that he had never coached basketball, but when hired by Mount Ida basketball coach was his first job. He has coached basketball, baseball and football.
When asked about his favorite memories from his coaching tenure, he quickly pointed out that some of his favorite memories came from his time as girls’ basketball coach.
“We had some pretty good girls’ basketball teams.” He stated.
As head coach for the Lady Lions he won 268 games in 15 years, for an average of just under 18 wins per season.
He admitted that as much as he enjoyed coaching basketball, football is probably the most fun.
“It was put into these kids hearts years ago to play hard, play with passion and they have done it ever since.” He stated.
Coach Sandlin’s love for Lion football is evident in everything he does, but the one thing most people talk about is the fact that he has only missed one game of Mount Ida football since 1968.
when asked about the game, he said it was a game against Mountain Pine in 1978 that ended with the Red Devils earning a double overtime victory over the Lions.
Jerry was refereeing basketball at the time and the October ballgame conflicted with a commitment he had to call a game, robbing him of a perfect attendance honor.
When asked what he is planning to do now that he has retired, he commented that he plans on fishing more and smiled as he pointed out that he was going to be a grandpa in a few months as well.
“I figure I will be pretty busy with that grand baby.” He said with a big smile on his face.
Coach Jerry Sandlin ends his career as a coach after 26 years, but has no intention of ending his streak. His retirement will also include Lions football under the lights on Friday night just as it has since 1968.