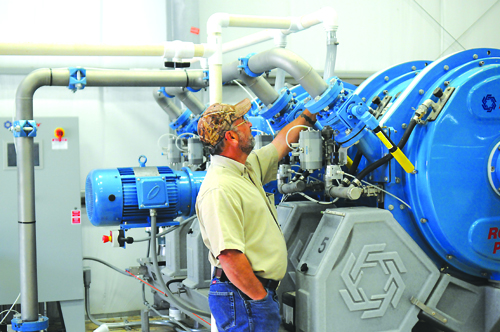 NASHVILLE – The long-running sewer replacement project undertaken by the city of Nashville is finally complete, according to city public works director Larry Dunaway in a statement before the Nashville city council during their monthly meeting Tuesday.
The project, begun under the administration of the previous mayor, Mike Reese, has culminated with the full-time operation of the new sewage treatment plant and the removal of equipment from the old structure, Dunaway reported. He stated that the final inspection by the USDA had been performed as well. He also reported that because of efficiency measures taken during construction, the city has $176,000 remaining from the initial USDA loan for the project and reminded the council that a decision of what to do with that remainder must be made quickly. He mentioned returning the amount to USDA, which would lessen the time the city would be required to pay on the loan, as a notable option.
Dunaway then noted that the sewage project was not the only infrastructure work in the city that would be impacting residents lives this summer, saying that the project to overlay several city streets with asphalt would begin next week. He reported that the streets to be overlaid have been posted, and that no one street will be closed for its entire length at any one time. That project will begin as soon as the state highway department is finished overlaying streets in Mineral Springs and one other nearby project.
Dunaway also noted that the grant application for a project to construct sidewalks along Mount Pleasant Drive, which becomes Fourth Street as it continues south, was ready to be submitted. He estimated that he would hear whether the grant was approved sometime between August and October.
City financial director Jimmy Dale also presented a brief report to the council, noting that the city was $59,000 above expenses for the month, even not counting the sales tax revenue, which had not been sent to the city by the state by the council meeting. Dale expressed frustration with the state treasurer’s office.
Dale contacted The Nashville News the following day with sales tax figures, noting that the city saw a 16 percent rise in sales tax collections from the same month last year – something that he attributes more to unusually poor economic performance in one month last year than unusually high economic performance this year. “Last year, the June numbers were down by more than 10 percent. This year’s June numbers are actually about average,” he explained.
Interim city park director Wendy Harris gave a brief recap of storm recovery efforts at the main park on Johnson Street and regular activities, saying that league baseball and softball had concluded for the year, with only a few district games set to be played in July, and that removal of stumps is the next, and likely final, step in storm recovery. She also noted that the park will receive a $25,000 grant from Tyson Foods on Friday.
City fire chief and code enforcement officer Jerry Harwell then spoke, saying that the majority of his time since the last meeting has been occupied with working on the city’s storm sirens.
Mayor Billy Ray Jones spoke again of his want to replace the city’s sirens rather than repair the existing ones, noting that the cost for replacement was not significantly higher than repair, and that maintenance costs in the future should be lower with modern sirens, which have fewer moving parts and simpler electronics.
Jones then spoke about being approached by FEMA officials about setting up an office in Nashville for seeing those in the area who had been impacted by storms and flooding this spring and summer. Jones said he had offered the federal agency space in the Carter Day Training Center owned by the city, but had not heard back from the group.
The meeting concluded on a different note, with council member Matt Smith questioning whether the city was properly advertising employment openings, stating that there were two instances that he could think of where the city had not advertised before hiring, which would conflict with state law. Jones replied that the city complied with state law on advertising job openings.