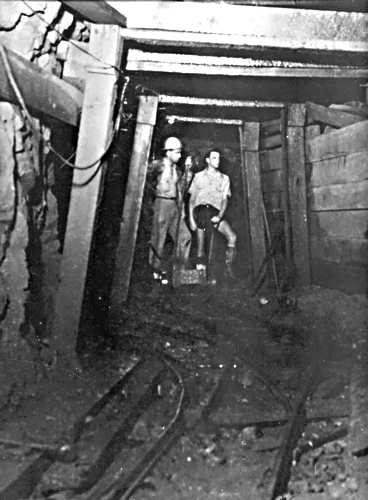 Throughout the counties of Howard, Pike and Clark, an explorer might run upon abandoned barred up entrances to underground passages or extremely wide, deep holes in the ground. These discoveries may be due to cinnabar mining, which was a popular industry in the area during the mid 1900s.
In 2000, Tammy Fant, a 19 year veteran Park Ranger at Lake Greeson as well as seasonal interpretive rangers Debbie Stark and Joe Crommett conducted an interview with 88 year old Robert Bob McElwaine, former owner of the mines.
McElwaine, also known as the “Mercury King,” said he got into the business because “there were not many jobs in the 1930s, so I created one of my own.” McElwaine, a Kansas native, caught word of Crown Cox’s discovery of a reddish colored rock in Pike County while squirrel hunting.
Having recently gained a degree in geology, McElwaine recognized the discovery of the rock as an opportunity to be seized. The geologist partnered with Leo Yauntz of the Southwestern Quicksilver Mining Company and created a booming business.
In no time, McElwaine had a number of mines across a stretch of 30 acres throughout Howard, Pike and Clark counties, five of which were primary production sites. The “Mercury King” said he had over 100 workers and had many more lining up to gain positions in the mines.
The first of McElwaine’s employees earned 15 cents an hour and worked eight hour days, seven days a week. The mines operated 24 hours a day, calling for shift changes periodically.
According to McElwaine, workers would crush the ore, vaporize the Mercury out of the cinnabar rocks, send the vapor through condensing fans and catch the remnants in buckets set up under the distilling system. Mercury was bottled on site and transferred to a vault at an old bank in Amity, where it was stored until shipment time.
Mercury thieves, coined as “high-graders” during the mining period, were abundant, so McElwaine did everything he could to keep the flasks containing his life’s work under strict lock and key.
Because Mercury was used in Mercury Fulminate, a material used to detonate weapons and explosives, the price of Mercury tripled during WWII, creating a booming business beneath the grounds of local areas – and aiding the home economy. Mercury was also used in the creation of thermometers, batteries and various other materials. Not long after the war ended, so did the demand for local Cinnabar production.
“A lot of memories, hard work, and education came from mining,” said McElwaine.
The maximum estimation of Mercury produced in the early 1900s in the local area is 12,500 flasks, each containing 76 pounds and totaling around 950,000 pounds of mined mercury.
The mining tunnels were around six feet wide, seven feet high, and anywhere from 230-600 feet deep. Three of the old mines are located on the Cinnabar Mine Nature Trail at Parker Creek. The entrances to the mines themselves are typically under water, but an observer cannot miss the large holes in the ground and tall piles of dirt that were extracted from the holes.
There are around 60 abandoned mines across the three counties. According to Marty Reynolds, Natural Resource Specialist, the mines have become a habitat for animals such as salamanders and bats, one of which is a species of concern: the Southeastern Myotis bat. The U.S. Fish and Wildlife Service placed the Myotis bat on the endangered list in 1967 “due to episodes of people disturbing hibernating bats in caves during winter, resulting in the death of large numbers of bats.”
The underground homes stay a consistent temperature of about 60 degrees year-round, making them desirable for their inhabitants.
Most of the mine entrances that are still above water have been barred up for the safety of curious visitors as well as the wildlife living inside.
What may seem to be random, large openings in the earth’s surface across Howard, Pike and Clark counties may possibly be the remnants of thriving cinnabar mines that created jobs for the jobless and aided local economies during the harsh times of Great Depression, as well as created homes for various species of wildlife in the area.