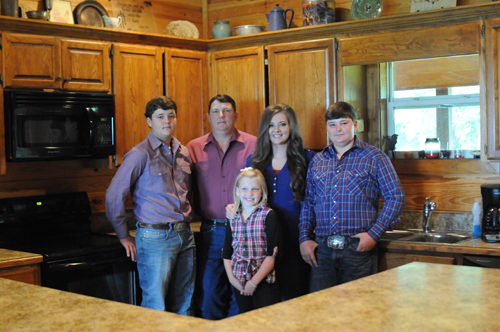 Bryan Billings does not credit himself with the success that has seen him and his family as Howard County Farm Family of the Year. Rather, he emphasizes the role played by his grandparents.

“This is really a tribute to my grandfather,” he said, “without he and my grandmother, none of this would be possible.” Billings explained that his grandparents, Glen and JoJo Billings, never gave to him for the spread he now manages, but rather offered him loans that allowed him the opportunity to do for himself. The loan that allowed him to purchase his first cattle came from his grandfather, and he speaks with great pride about paying back his grandfather, and grandmother after his grandfather’s death in 2005. “I’ll make the last payment next year,” he explained.
“And I’m not the only one they helped around here,” Billings stated, “I can name dozens of farming families that he helped around here. He could have left his money in a savings account, but he saw he could invest in people, giving loans for land and cattle. That’s important.” Billings went on to say that one of the most important things he learned from his grandparents is that being there for friends and neighbors is a key part of life, and something that he tries to emulate.
That lifestyle is apparent after only a few minutes visiting at the Mountain View Ranch, named for its stunning view of the foothills of the Ouachitas spreading north of the Billings house, where several young people – and not just Bryan’s children – just getting into agricultural life are earning and growing with Bryan’s example just as he learned from the example of his grandparents.
Billings took not only the example of his grandparents, but also the training he acquired in the U.S. Navy Combat Battalions, the world famous SeaBees, to develop what was at times marginal land into good pasturage for raising cattle and sound structures for chickens, operating his own D4 Caterpillar bulldozer to clear gum thickets and brush, and also to correct grades and drainage.
That has been something he has done a lot of in the last year, rehabbing 165 acres he purchased last year, in addition to developing 12 acres near Dierks to be ready for homes. His land work he describes as more of a hobby, though, a distant second to operating his farm.
That farm currently consists of a cow-calf operation with more than 200 head, nine broiler houses that have, over the past 14 years, produced just over 5 million chickens, and around 750 acres. He also has a few horses, space for his two sons, Dillon and Dalton, to raise show cattle, and a donkey that he reports likes to get on the porch and eat the dog’s kibble.
Billings speaks with pride about his children, seeing his sons already going into agriculture with a small herd of cattle that they share, his oldest daughter at college studying to help those with developmental disabilities, and his youngest, who actually likes picking up chickens in the broiler houses. He says he wants to do as his grandparents, not giving them things, but providing assistance for them to grow and develop themselves.
“I had about ten years where I wasn’t doing right. My grandfather helped me get past that, to live how I need to live. I want my kids to grow up already living right,” he said.