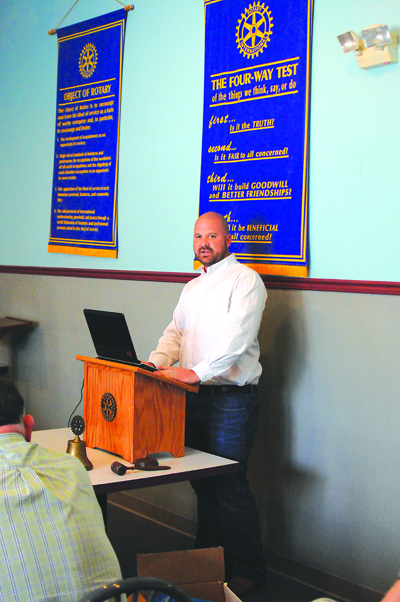 First to address the crowd of about thirty were Nashville mayor Billy Ray Jones and public works director Larry Dunaway, who spoke about the ongoing cleanup efforts in the city after last week’s tornado.
“We’ve got trucks out, and if people have tree limbs pulled to the curb, we will get to it – it might take us a while, but we will get to it,” Jones said. He praised the large numbers of volunteers who have helped with the cleanup so far, and noted that professional crews from power companies and other groups were able to complete their efforts much more quickly – in less than half the time in some cases – than they originally estimated because of the work of volunteers.
Jones also spoke about the question of assistance from the federal government. He reported that Howard County had already put in a final report in the request for assistance, but that the other nine counties declared in the disaster area were much more heavily affected by flooding and were waiting for a break in recent heavy rains to get final assessments before completing their parts of the request. He also expressed doubt that damage estimates would reach the “magic $4.1 million number,” which would trigger assistance from FEMA, saying that state agency estimates had just passed that mark, but “the federal government does their accounting differently.”
Jones did note that even if funds are released from FEMA, the city would be limited to working on public property. “If the property owners can get down trees to the curb, we can do something about it, but we can’t come onto private property,” he said.
Members of the group also questioned Dunaway about the sewage treatment plant. Dunaway reported that the long-running project to replace the city’s previous treatment plant was close to completion, with the new plant actually running, but not yet ready to shut the old plant down.
The second presentation of the meeting was by state representative for the area Justin Gonzales. He spoke generally about bills passed in the recently concluded legislative session, as well as items expected in the upcoming special session to be called after Memorial Day.
Gonzales stated that 1237 new laws were passed by the legislature in their recent session. Among those, he noted the abolishment of the Lottery Commission, bills encouraging the use of telemedicine, the rollback of a exemption for capitol gains taxes, and a ban on cities making ordinances that would be anti-discrimination measures.
He then spoke about his expectations for the special session expected to be called by the governor. He said that the central issue for the session would be the approval for giving substantial taxpayer monies, $85 million, to military contractor Lockheed-Martin in hopes of that company expanding its operations in East Camden to produce the replacement for the military Humvee.
An additional issue that was brought up was the proposal to move the Arkansas primary from May to March. State senator Larry Teague, in attendance at the meeting, stated that he would be voting against the measure, noting that it would require moving the legislative session, and also that he did not relish the idea of the campaign season stretching back before Christmas of the year before the election.
Speaking after the meeting, Gonzales went further to say that he generally does not like the “economic development” schemes that give private companies large amounts of tax money to locate in state, but that he feels the Lockheed-Martin deal is a special case. He also expressed neutrality on the idea of moving the state’s primary, noting that it was hard enough for a “regular guy” to run for office with the current length of the campaign season, and that local and state government should be more important than presidential campaigns.