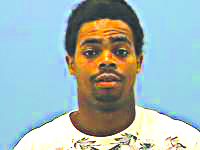 NASHVILLE – A McCaskill man was arrested Tuesday in Nashville in connection to allegations of sexual assault.

Dontarius Rashaud Armstrong, 22, was arrested following an interview with police Tuesday morning. According to statements made by police sources, the interview was prompted due to a report of sexual assault made by a minor. The approximately 13 year old girl reportedly claimed to have been assaulted the night of May 11.
According to prosecuting attorney Bryan Chesshir, the charge Armstrong was arrested on, sexual assault in the second degree, will likely be amended, and the investigation into the incident is still ongoing.
Armstong is currently being held in the Howard County Jail.