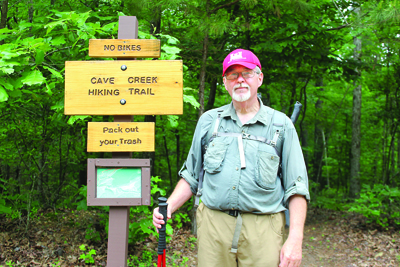 DIERKS – Hikers at Dierks Lake are now able to take a different route with the creation of the Cave Creek Hiking Trail.
Work on the trail began three years ago when Thomas Trigg and his wife, Janet, a couple who reside at the lake and frequently do volunteer work, were approached by Tiffany Smith with the Corps of Engineers. The Cave Creek Trail, which is still a work in progress but open to hikers, has been created by hand, with most of the work being done by the Triggs and a few welcomed volunteers.
“We are still working to complete it, but it is very hike-able,” T. Trigg explained. “Not only am I building it, but I am also working to maintain it, which is a constant job.”

The signs located on the trail were made by Dierks High School student Jake Eudy in his agri class, which is taught by Shannon Bailey. Much of the volunteer work has come from followers on a web forum founded by Trigg, backpackingarkansas.com, which has went in partnership with the corps in trail-building efforts.
Several portions of the approximately 3 and 3/4 mile route is incorporated with old logging roads and paths that were once used by Weyerhauser before the Corps of Engineers acquired the land.
Its appearance is that of something virtually untouched by man and gives those trekking it the feeling of being much more “out in the wild” than they actually are.
“We are trying to keep it as natural as possible,” noted T. Trigg.
There are four different access points on the trail, one of which leads to the dam making it very accessible for fishermen.
The weather of late has halted trail work and has caused flooding on a portion of it. Once the weather clears, T. Trigg plans to clean up flood damage and other destruction brought about by the heavy rainfall and continue working to extend the path and correct any errors. Upon full completion of the Cave Creek Hiking Trail, T. Trigg said he hopes to go back and redo some of the areas, as well as add some more “switch backs.”
T. Trigg went on to comment that it could take one to two more years before the trail meets the standards he hopes it to reach, depending on the amount of volunteer work he can gather.
Those interested in donating time to creating this novel backpacking route may contact the Corps of Engineers’ office by calling 870-286-2346 or by emailing T. Trigg at triggtom1@yahoo.com.
As of now, the trail is open for day use and foot traffic only.
“If anybody needs any help or has any questions, I am here to help,” T. Trigg said.
On a scale of 1-5, with five being the most difficult, T. Trigg rated the trail a 1-3, depending on the portion.
“It’s a good trail to start hiking on,” he said. “For those that backpack, it’s a good trail to try out new equipment on.”
T. Trigg has done volunteer work with the forestry service on several other trails. He has been hiking since the mid-1970s and first became interested during the backpacking boom started by Colin Fletcher. He purchased his first book, “The Complete Walker,” and went on to buy the rest in the series.
“Colin Fletcher probably single-handedly started the backpacking movement in the 1970s,” T. Trigg said. “My interest was already there, but he really inspired me.”
It was when the Triggs moved to the area that they became heavily involved in trail maintenance and construction, which has went along well with their love of hiking.
“Hiking is fantastic exercise,” T. Trigg remarked. “I put it somewhere between walking and running. [The Cave Creek Hiking Trail] is a great place to do it. There are always different things to see at different times of the year.”