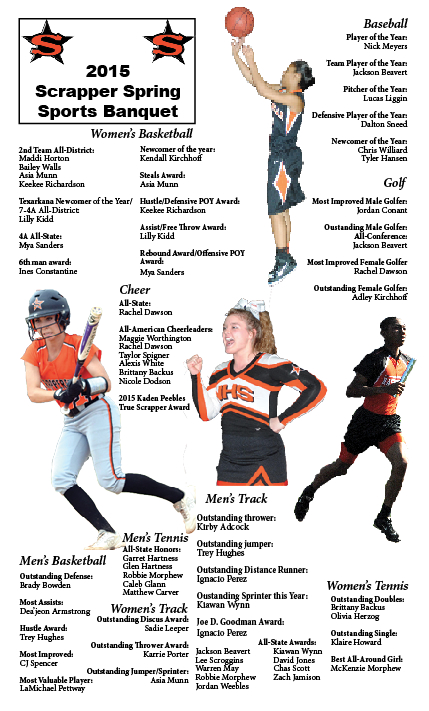 Rachel Dawson and Jackson Beavert were recipients of the 2015 Nashville Scrapper and Scrapperette Awards May 19, capping off a night of awards for spring sports at Nashville High School.

Susan Renfrow, coach of the cheerleading team, also introduced a new award. In honor of Kaden Peebles, who was recently diagnosed with cancer, Renfrow named a new award the “Kaden Peebles True Scrapper Award,” which will now be given annually to a Nashville athlete that demonstrates, “what it is like to be a true Scrapper,” Renfrow said.

The women’s tennis team, which finished 9-3 on the season, returns all six starters. In this year’s awards, Brittany Backus and Olivia Herzog were awarded Most Outstanding Doubles players and Klaire Howard was awarded Most Outstanding Singles player. MacKenzie Morphew also received the award of Best All-Around Girl. Backus, Herzog, Alexus White and Leslie Lingo all were recognized as members of All-District.

“They work hard,” said Coach Damon Williams, who serves as both the tennis head coach and the men’s basketball coach. “There is nothing more enjoyable than working with a group that is really coachable and they are just that.”

Moving on to men’s basketball, Brady Bowden, who took 19 charges this year, was awarded Outstanding Defenseman. Dea’jeon Armstrong was given the Most Assists Award. Trey Hughes received the Hustle Award and C.J. Spencer was awarded the Most Improved Award.

LaMichael Pettway was recognized as All-State, and the men’s basketball most valuable player.

“We started out with a few injuries and discipline issues, but then the men worked extremely hard. I am looking forward to next year,” said Williams.

Women’s basketball, a team that finished 22-6, was also recognized at the banquet.

“This was a fun bunch to coach and practice with. They played great defense. We gave up 39 points a game this year, and we averaged 54,” said Coach Ron Alexander.

Ines Constantine was awarded the 6th man award, Kendall Kirchhoff received Newcomer of the Year, and Asia Munn was given the Steals Award. The Hustle Award and the Defensive Player of the Year Award went to KeeKee Richardson and Lilly Kidd was recognized as the Assists Award winner and the Free Throw Award winner.

Sanders, who signed with Southern University, out of Shreveport, was awarded the Rebound Award and the Offensive Player of the Year Award.

“We lose three seniors but we have a lot of juniors and we are going to be a great team next year. We’re going to play hard and we already got started and have a couple of camps this summer,” Alexander said.

In men’s track, Kirby Adcock received Outstanding Thrower Award and Trey Hughes was awarded Oustanding Jumper. Ignacio Perez was the recipient of the Outstanding Distance Runner and the Joe Lee Goodrum Award. Kiawan Wynn was given Sprinter of the Year.

The Scrapper men’s track team finished by winning the district championship for their sixth consecutive year. They won the district meet by 101 points, which set a state record.

The baseball team finished 20-8 on the season, compiling only 44 errors in 28 games and 131 bases stolen.

Chris Willard and Tyler Hanson were awarded Newcomer of the Year Awards.

“It was a great year. Going in, I had no idea where we were headed, but they played good and it was one of those years that we talked about where if you pitch well and play defense, you will have a chance and we did that well,” said Coach Kyle Slayton.