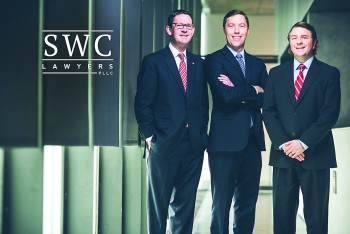 LITTLE ROCK – Native son and former
candidate for attorney general Nate Steel
announced Tuesday the formation of his
new law firm along with partners Mar-
shall Wright of Forrest City and Winston
Collier of Searcy.
The firm, Steel, Wright & Collier, PLLC,
will be officed in Little Rock, but Steel
stated in a recent interview that because
of technical advances the firm will be able
to be a statewide organization operating
from wherever the partners are.

“Marshall will still work in Forrest City,
I’ll be in Little Rock, Nashville, or travel-
ling the state. With things like electronic
court filing, you don’t have to be tied to
a particular office,” he explained.
A released statement with the an-
nouncement described the new group
as a “boutique business and personal
litigation law firm,” though Steel said that
the partners will be acting largely as a
general practice legal office with a twist.
“A major focus is going to be as a
business practice, handling work for
community banks and community health
providers, but it’s also about the same
things that motivated me to run for attor-
ney general,” Steel stated. “I’ve been pas-
sionate about the same things my entire
adult life, and that’s why I didn’t do what
a lot of people who run for office do after
and gone into lobbying. Especially with
some of the controversial moves that the
legislature have made this session, there
are a lot of people who feel that they don’t
have a voice. We want to be a voice for
people who don’t have a voice.”
Steel also said that his choice of
partners would have an effect on the
statewide nature of the new firm. Both
operated private practice firms in more
rural areas of the state for years. Wright,
who is originally from Little River County
and has known Steel throughout both
their lives as well as having served with
Steel in the state legislature, has ties to
both southwest and eastern Arkansas.
Collier, originally from Augusta and resid-
ing in Cabot, worked on Steel’s campaign
for attorney general, travelling around
the state making connections.
Steel says that he is confident that the
new firm will be able to make a difference.
“We’ll do good things,” he said.