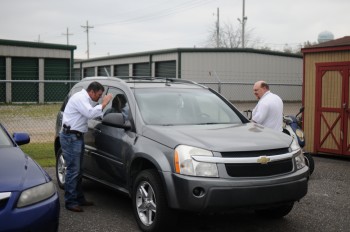 NASHVILLE – An auction of items
seized by the Nashville police de-
partment and the Howard County
sheriff’s office is set for this Sat.,
April 4 at 10 a.m. at the Carter Day
Training Center by the city water
reservoir in Nashville.

According to Nashville Police
Chief Dale Pierce, the auction will
include mostly vehicles and fire-
arms. He said that in addition to
items seized by his department and
the sheriff’s office, the regional drug
task force would also be submitting
items for bid. He also revealed that
some disused police vehicles that
are no longer in service will also be
offered for sale.
Howard County Sheriff Bryan
McJunkins disclosed that other
miscellaneous items will also be
included in the auction, including an
antique Coca-Cola dispenser.
Pierce said that all sales will be
concluded at the auction, stating,
“It’s cash on hand. Whatever is bid
has to be paid right there, either in
cash or a good check.”
Pierce also said that the sale
of firearms has several other firm
rules.
“To buy a long arm, a person
has to be 18 years old, a resident
of Arkansas and not have a felony
record. For handguns, they also
have to be over 21,” he explained.
The pair said that they expect
the number of vehicles, including
the former police cruisers, to be
around 10, while nearly 150 firearms
will be up for bid. They would not
speculate on how many would at-
tend the auction, but claimed that
they expected most items to sell at
good prices.