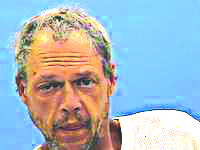 NASHVILLE – A New Orleans man was arrested in Hempstead County this week on charges stemming from an alleged theft in Howard County, as well as weapons charges.
According to an affidavit of arrest released by the Howard County Sheriff’s Department, George Ron Gitchell was taken into custody after a warrant was issued for his arrest alleging that he stole food and dishes from one victim and a television from another.
According to the report, the alleged victim reported their absence on April 16 and “advised that someone had been in her house and that she noticed some of her mother’s plates missing.”

Gitchell admitted to the crime during a police interview Tuesday at the Howard County Jail, according to the affidavit. He also allegedly admitted to taking a television from another victim’s residence, which he was occupying at the time. It was noted in the affidavit that Gitchell claimed he “broke it and was going to have the television repaired.”
After having the item fixed, Gitchell stated that he pawned it to an individual for $250 and did not pay the victim, who reported the theft on April 3.
Other charges Gitchell is facing stem from the exchange of a possible stolen handgun and possession of a firearm by a convicted felon. The affidavit said that Gitchell also admitted to receiving a handgun from an individual “having good reason to believe that it was stolen” and going on to sell it for profit.
Not only that, but Gitchell allegedly “admitted that he has a previous felony conviction and knew that he could not possess a firearm and [sic] any kind.”
It was reported that Gitchell was convicted of felony possession of cocaine in 2008 out of Jefferson Parish in Louisiana.
Gitchell is being charged with Residential Burglary, two counts of Theft of Property and Possession of Firearm by Certain Persons.