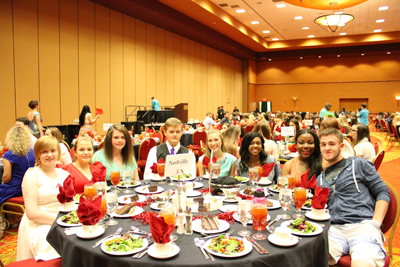 ROGERS – Eight students from the Nashville High School Journalism class traveled to Rogers Sunday afternoon to attend the Arkansas Scholastic Press Association annual convention. Included in the event were an award banquet, dance, and many classes taught by advisors and professionals from around the state including NHS graduate Logan Webster.

Students that attended from Nashville included juniors Alli Davis, Evan Lamb, Klaire Howard and Luke Reeder. The seniors in attendance included Ayhana Burns, Brooklyn Maynard, Danielle Jesse and DeMia Hendrix.
After a year of hard work and much time spent on both the yearbook and the school’s student newspaper, The Tattler, the students from journalism were able to reap the rewards of their work in the form of 46 total rewards. These included 27 honorable mentions, 15 “excellent” ratings, one “superior,” runner up for 4A Designer of the year, and 4A Newspaper and Year book editor of the year.
With many other schools from around the state as competition, Davis, Jesse and Maynard were able to reach the top tier of their respective categories. Davis was named newspaper editor of the year in her first year as the editor of the Tattler,.
“I was actually pretty anxious during the first part of the awards banquet,” she said. “I was not necessarily surprised to win, but it made me feel great about what I have done as an editor so far and confident in what I will do.”
While Davis used her win as a confidence builder, Jesse used her second place finish as a way to motivate her in her work.
“It sucks and I am bitter, but I see it as a great way to improve myself for future endeavors,” Jesse explained.
Last came Maynard, who secured editor of the year in the yearbook category for the second consecutive year and her third such award in total, having won in the newspaper division her sophomore year.
“My sophomore year I won editor of the year for newspaper and this was my second year to win it for year book. But this year was also sad because it will be my last year to represent my school,” Maynard said.
After many awards, some great food and another five hour trip home, the Journalism team got back in stride and began their final push to finish the 2015 yearbook and the last issues of the Tattler in order to have an even better showing next year at the ASPA convention. Arum faccupta