Travis Donn, Kansas City, MO, completed the Ouachita Challenge Race Sunday in 4:35:52 to beat nearly 200 other riders from 13 states as well as one from the United Kingdom. Donn was less than a minute slower than his record time of 4:34:58 set last year.

Only one Arkansan finished the race in the top 10, according to statistics, which shows the Challenges widespread popularity around the country. Sara Sheets, Fort Collins, CO, turned in the fastest time at 5:25:04 to capture first place in the womens division. Second place went to Laureen Coffelt, Memphis, TN (also 2nd last year) who rode the 60-mile course in 5:47:18. They were among 14 women riders who completed the race. Eighteen riders competed on single-speed bicycles and two teams competed on tandem units. 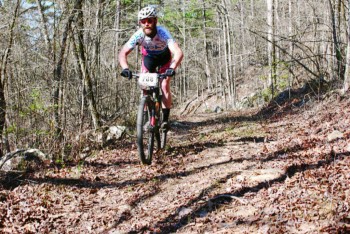 Overall there were 190 riders this year, even though the race was a sell-out with 250 registrants. This was the 15th year for the race, with registration closing within hours of opening when the participant list reached the maximum allowed by U.S. Forest Service (USFS) crowd restrictive rules.

USFS has the authority to regulate the race size since the course utilizes Forest Service Roads, as well as both the Ouachita and Womble trails, which cross USFS land. Saturdays tour, also a 60-mile course, runs much of the same route as Sundays Challenge Race. The maximum number of participants is the same as the Challenge, since the number is also set by USFS rules.

Only one Arkansas rider appeared in the top twenty finishers on the Ouachita Tour, which again shows the weekends popularity and tourism benefit. With the number of riders, their families and support staff participating in the two-day event, the economic impact of the race is important to the Montgomery County economy, according to race organizers. In addition to the actual weekend of the race, many of the participants visit the area during the year to ride the trails and get a feel for the terrain they will experience, noted Robert Cavanaugh, the local volunteer instrumental in securing workers for checkpoints and aid stations. Overall, over 100 volunteers combine to make the event happen.

In addition to riding in the Ouachita Tour and Challenge, other participants expressed appreciation for the LOViT (Lake Ouachita Vista Trail) a newly completed 40+ mile trail along the southern side of Lake Ouachita. Some riders were staying at local resorts so they could take a pleasure ride to finish out their time in the area.