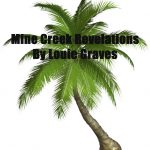 WARNING TO both of my regular readers: This column was written under the influence of medication for the epizootic. It’s that time of the year.

THERE ARE MANY gravel roads criss-crossing the piney hills on the east bank of the Antoine River, a narrow sometimes-clear/sometimes-muddy fishing stream which separates Pike and Clark Counties.

I’ve driven on those roads twice on the Clark side.

First time was a couple of decades ago with the late Woody McDonald. He knew the way because he’d been there many times. We sat in his Jeep and watched the clear river slide silently by. Woody was a Nashville alderman and at a city council meeting once I had mentioned I wanted to see the place because of its historical connection to the Graysonia, Nashville and Ashdown short line railroad (GN&A RR). Woody said that not only did he know the way, he’d take me.

Sitting beside that river in his buggy, Woody told me a story about his grandfather who grew up at Graysonia. Maybe it was his great-grandfather. I can’t remember, now. When Grandpa was a boy he walked down to the nearby river to take a swim. Stripped off and got into the coolish waters. After a while, he felt he was being watched. Looked across the river and there was a large mountain lion licking its chops.

Grandpa began wading toward the opposite shore where his clothes were stacked. But the lion bounded down a few yards to where the river was narrower, and it leaped across. Came back up and squatted near Grandpa’s clothes. Grandpa waded back toward the other side, and the lion returned to that spot. They did this back-and-forth for awhile, and then Grandpa — scared and cold — just squatted neck deep mid-river until finally the lion departed.

After a cautionary period of time, the boy left the river, and ran home barefooted over those gravel roads with his clothing bundled under his arm. I’ll bet he could imagine that lion coming after him and closing the gap.

THE NEXT time I went was decades later with the Navigator who claimed to have a relative that once lived at Graysonia. She wanted to see the place.

I remember the way, I bragged. We drove past Footsie’s First Chance store after crossing the river bridge at Antoine. Then I turned north off the highway and onto on the gravel road to Graysonia which I thought I recognized.

We never found the river but there were a number of experienced mobile homes tucked into the trees beside some of the gravel roads. As we passed one of those residences there were some men doing something in the yard. I never got a good luck at what they were doing because the Navigator was making dire threats at what she would do to me if I stopped to talk with them.

There were some mudholes on some roads I didn’t trust my pickup truck to get through, and that is probably how we missed finding the river.

We finally gave up and drove home. Past Footsie’s Last Chance store and over the river bridge into Pike County.

So, I have now been to Footsie’s more often than I have been to Graysonia.

At Footsie’s they remember me. I tried to buy something there once and offered to write a check for the purchase — a modest quantity of Dr. Busch’s Genuine Pioneer Snakebite Medication. “Ain’t you got a credit card?” the lady asked.

The rail line never got to Graysonia. It was part of a grand plan which investors hoped would go all the way to Hot Springs. A history book says that Nashville and Murfreesboro were actually connected. The dream was dashed by the nation’s economy, the start of World War I and the advent of the trucking industry (the main purpose of the rail line was to haul logs).

THERE AREN’T many people who can say they’ve ‘driven’ a GN&A switch engine.

Went there one night with the railroad superintendent. We started the engine (or maybe it was still running) and he let me back the engine out of the ‘house’ and we went down the tracks a little ways.

Before we got to Main Street he stopped the heavy engine, and started it forward in the direction of the shed.

He let me take the controls again, but took over as we got close to the engine house.

“You don’t know how to stop this thing and you’d probably drive it right into the side of the ice plant,” he explained.

That’s all I know about Graysonia.

THINGS I LEARNED from opening (and believing) email. The sentence: “The quick brown fox jumps over the lazy dog” uses every letter of the alphabet.”

WORD GAMES. Another set of twins: Dot and Dash, from the famed Morse Code family. Also related to Dit and Dah.

SHE SAID: “I know. I’m lazy. But I made myself a New Years resolution that I would write myself something really special. Which means I have ’til December, right?” Catherine O’Hara, comic