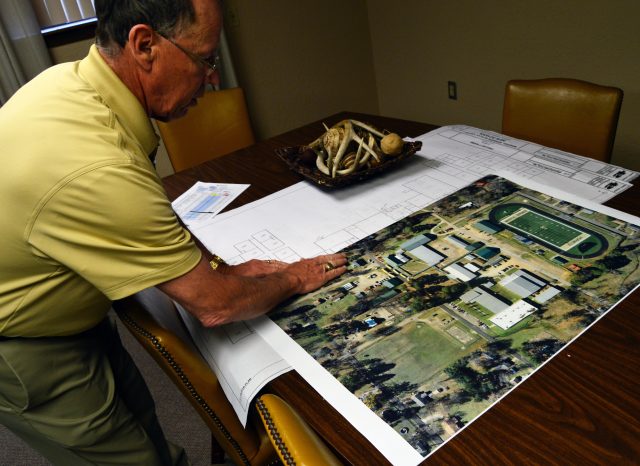 The first steps for physically making way for the new $17 million school are taking place this week at the Mineral Springs campus.

As soon as Internet connections are restored, the school district’s administrative operations will be moved from Mineral Springs to the Saratoga campus, which had been shuttered since 2012 but is now ready to figure in the district’s future plans.

“We’ve already changed our physical address to the Saratoga campus,” Superintendent Curtis Turner, Jr., said Monday morning. He said plans are to pack up “the bare minimal that we’ll need to open up shop” and make the move in one day.

“We want to fire back up that same day,” he said. “We can’t afford to be down for several days.”

The reason for the relocation involves the location of the new school, Turner said. The new school will occupy the two southernmost blocks of the MS campus. On those two blocks and set for removal beginning as early as June are the administration building, the bus shop and the ABC and Head Start preschool buildings with their students and contents to also be prepared for temporary relocation to the Saratoga campus.

The two blocks will be virtually covered by a building that will house kindergarten through 12th grade “under one roof.” The new school will include 35 to 40 classrooms, a new gymnasium, an expansive courtyard and cafeteria. “We’re not going to have much of a yard to mow,” Turner said.

Everything now on the future construction site must go, Turner said.

“As soon as we get everything cleared out and disconnected, we’re taking this out,” he said as he circled two blocks on an aerial map which also includes the practice field and an adjoining house the district bought less than two months ago. He said the city recently condemned the portion of North Holcomb Street that leads to the front of the high school and splits the two blocks so the road can be legally closed and covered by construction.

“The goal is to move in fall of ’17. But, with a project of this size, there will be so many variables we just can’t control,” Turner shrugged before conceding that a January of 2018 move-in date seemed more probable.

With the two blocks cleared and the remainder of the active campus to be separated by a construction fence, Turner expects little disruption once construction starts with the noted exception of the temporarily relocation of the preschools to Saratoga.

The Saratoga classrooms and cafeteria have already been cleaned and prepped for the preschoolers and playground equipment will also be relocated. Once school starts back next August, the preschool students will have to be transported to and from the Saratoga campus for about two years, Turner said.

While the preschools are relocated, buses headed to MS that normally pass through Saratoga from points in the district such as Columbus and the Fulton area will drop the preschoolers off at Saratoga. Turner said preschoolers who arrive at the MS campus on buses from other areas of the district will be “intercepted” and then transported to Saratoga.

The students will spend the school day at Saratoga and then the process will be reversed to get the preschoolers aboard their respective buses and back home. “Obviously, that plan may be modified, but that’s what I’m going with right now,” Turner added.

Once the new school is complete, the preschool and the administrative operations will return to the Mineral Springs campus. Turner said the proposal is to convert the new wing of the existing elementary into a preschool building since the new wing currently meets all the codes and standards required to house young preschool students.

Many of the existing buildings on campus – including the gym and the “agri” building – will be kept in operation after the new school is complete. Older parts of buildings with new additions will be phased out and removed, Turner said, as “time and money allows.” Plans are to also create a centralized parking area as plans progress.

“It’s been a long process to try and get us to this point to do something,” said Turner. “We’re talking thousands and thousands of decisions that you have to make. Hopefully, we’re not missing anything.”

A meeting has been set for April 6 with the project’s architect and construction company, and Turner said he hopes to “get a lot of the nuts and bolts of the project worked out” during that meeting and the many more that will follow.

In meantime, Turner said an April 14 date has been set to appeal the district’s academic distress status with Arkansas Department of Education. But, since the school district is being represented by civil right attorney and state representative John W. Walker in a recently filed federal lawsuit against the ADE Turner expects the hearing to be delayed until sometime in June.

Turner said he wholly expects the school district to be removed from the ADE’s list of schools in academic distress.