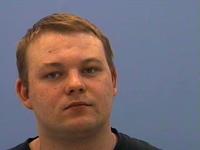 McJunkins said Gary Wilkes, 21, of Arkadelphia, was arrested a little before 5 p.m. when he came to the jail to pick up his last paycheck. Wilkes had been recently employed with Howard County as a jailer/dispatcher for the last several months but turned in his resignation on Tuesday citing his last day as Wednesday, April 6. “His reason for leaving was other employment opportunities,” the sheriff stated.

Wilkes was arrested for and charged for indecent exposure (a class A misdemeanor) after Chief Deputy John Eric Glidewell and Jail Administrator Jana Tallant received reports of Wilkes showing inappropriate pictures from his cell phone and later exposing himself in person to some of the female inmates over the last few days of him working as a jailor. He also passed hand written notes to them that contained inappropriate and explicit, sexual content.

Investigators Blake Eudy and Jade Hughes joined the investigation and were able to obtain a probable cause finding from District Judge Gunter for the offense. Judge Gunter set Wilkes’ bond at $5000. Wiles bonded out of jail and has a court date set for Howard County District Court.