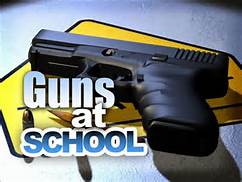 The South Pike County School District will begin exploring the possibility of having some of its employees trained to carry weapons on its campuses in Murfreesboro and Delight.

School board members gave Superintendent Roger Featherston permission, last week, to look into the matter further after he reported a school improvement parent advisory committee had suggested and approved of the idea. Featherston said he did not need any board action on the matter at the time but did want the board’s approval to move ahead with exploring the issue.

“My big thought about the Delight campus is there is no local police,” Featherston said. He said although police are “fairly close” to the Murfreesboro campus, “history shows that the police can’t get there to stop it if you have some type of bad situation.”

“They are usually there to help out in the end,” he said. “That’s just the way it’s been in all the school shooting cases.”

Featherston said he has already looked into the laws concerning arming school employees and found the training will be very extensive and very specific. The issue would require approval from the school board and the Arkansas Department of Education. The Arkansas State Police would conduct the needed training, which Featherston said would be in three parts with one part alone involving 60 hours of training.

“It’s going to be pretty detailed,” he said.

The board will then be tasked with deciding which employees will participate. “We need to be real careful about who those people are,” said Featherston, who later added he was interested in being one of the armed employees and that he knew a few others who were interested but that he did not want to “put any names out there yet.”

“My big concern would be making sure we are comfortable with the people we get on that list,” he said. “It would have to be people we could trust in a high-pressure situation.”

The board took no action on the issue, but all board members present nodded in agreement during Featherston’s comments. Scott Maroon did not attend the meeting and those present included Joe House, Trent Cox, Angie Price Fabian, Jeramy Humphry, Steve Conly and Walls.

“I think it would be worth the trouble,” Featherston said. “I just don’t think you can be prepared enough.”