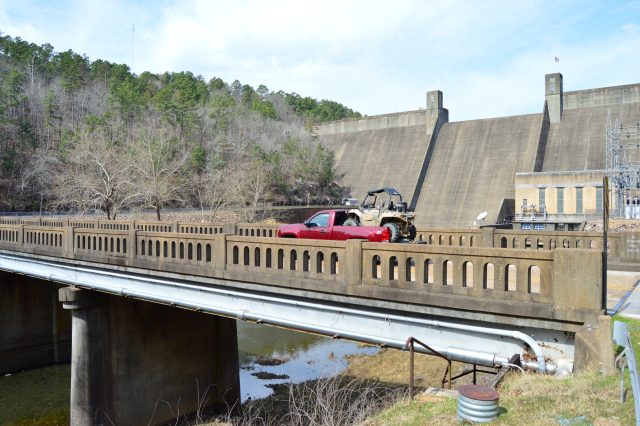 Lake Greeson Corps of Engineers officials are currently awaiting word on if and when the Narrows Dam Bridge will undergo scheduled preventive maintenance.

When the work begins, which is unknown at this time, the bridge will be closed and traffic will have to be rerouted to the Sour Springs Road, a rough dirt one-lane road which skirts the Lake Greeson Wildlife Management Area and leads the long way around back to Murfreesboro.

The bridge, built in the late 1940s as construction of Narrows Dam neared completion in 1950, is due some “minor preventative maintenance,” according to Eric Jenkins, the U.S. Army Corps of Engineers’ Lake Greeson manager. Jenkins said the bridge is inspected every other year and is “structurally sound” and poses no risks to travelers.

“This has been in the works for awhile,” he said. “It’s scheduled now, but it might not happen any time soon. As soon as exact dates are determined, then we’ll know more about what to expect.”

Jenkins said there are no plans to close any part of the lake when the bridge work begins and the Lake Greeson Wildlife Management Area should not be affected. How visitors will get to the lake, and how a handful of residents who live on the Beacon Hill side of the bridge will get to their homes are the only expected major aspects of the minor bridge work.

The lake’s recreation areas opened March 1 and camping season will soon get into full swing. Jenkins said there is a possibility the work could be delayed until winter to limite the disruption of access to the lake. He also said the availability of funding and the scope of the work will determined how long the bridge will be closed and Sour Springs Road will be needed as alternative route.

Jenkins acknowledged the work could take a week or two or could take a month or more. He also said there is a possibility the bridge will not need to be closed at all during the work.

Lake Greeson officials have been in contact with Pike County officials about possibly helping improve the condition of Sour Springs Road. Jenkins said there will also have to be coordination with the school, area law enforcement and fire and emergency services if plans move ahead and the bridge is closed for work.