She was born Feb. 27, 1929, in Dierks, the daughter of the late Jim and Rosie Choate Hill.  She was a homemaker and member of the Dierks Church of Christ.

She was preceded in death by a number of brothers and sisters.

Survivors include: her husband of 67 years, Cletus Brock; two daughters, Joan Williamson, and Patricia Bissell and husband, Terry Bissell; a son, Tim Brock and wife, Debbie, all of Dierks; also grandchildren and great-grandchildren.

Funeral services were at 10 a.m., Saturday, Dec. 5, 2015, at the Dierks Church of Christ with James McRae, Bill Paxton and Lance Lowrey officiating. Burial followed in Dierks Cemetery under the direction of Wilkerson Funeral Home in Dierks.

Elaine was born on May 15, 1925, in Jonesboro, Ark., to Matthew (Mathias) Anton Thennes and Genevieve Ula (Difani) Thennes.

Elaine graduated from St. Paul Catholic School in Pocahontas as the valedictorian in May 1944. She worked at Oak Ridge, Tenn., from 1944-45, with her family on what later would become known as the secret WWII project to build the first atomic weapon. She then attended St. Vincent Infirmary School of Nursing in Little Rock, Ark., and graduated at the top of her class in 1949. Elaine then worked for Dr. Matthew A. Baltz and later for Dr. Thomas DeClerk in Pocahontas. Elaine married James (Jim) E. Hoelscher at St. Paul the Apostle Catholic Church in Pocahontas on Sept. 6, 1952. She became a registered nurse and later worked at the VA Hospital and U. of A. Infirmary in Fayetteville while Jim attended college. After the family moved to Walnut Ridge, she worked as a nurse at the Lawrence County Memorial Hospital and later at the Arkansas Department of Health (ADH) in Lawrence County. The family then moved to Nashville, Ark., where she worked for Dr. Smith, M.D. from 1964-65, as the director of the Golden Age Nursing Home from 1965-66, and later as for the Arkansas Department of Health (ADH) as the Public Health Nurse for Howard County beginning in 1966. There she greatly expanded services offered including vaccination, mid-wife, family planning, health education and services, a new health department building, and other programs all based on the needs of the entire community. Elaine moved back to Pocahontas in the early 1980, worked as the ADH Public Health Nurse for Randolph County, and retired in 1987 after twenty years of service to the state. She worked tirelessly throughout her entire nursing career to improve public health in Arkansas. Elaine lived on the family farm on Hoelscher Lane west of Pocahontas until 1998 when she moved into the Outlook Pointe/Elmcroft assisted care center and then finally into the Pocahontas Healthcare and Rehabilitation Center.

Elaine is a past member of the American Public Health Association (APHA), APHA Southern Branch, and the Arkansas Public Health Nurses Association. She had received numerous awards and citations during her long public health career.

In lieu of flowers, memorials may be sent to St. Paul the Apostle Catholic Church Parish Life Center fund or to the charity of your choice in her memory. 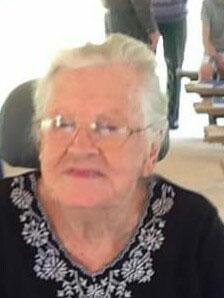 She was born Aug. 14, 1922 in Bonnerdale, Ark. She was a homemaker and a member of the Umpire Free Holiness Church.

Funeral services for Mrs. Strasner were at 2 p.m. Tuesday, Dec. 8, 2015, in the Umpire Free Holiness Church with Don Vaughn and Jerry Strasner officiating. Burial followed in the Cedar Hill Cemetery under the direction of Wilkerson Funeral Home.

Memorials may be made to the Cedar Hill Cemetery Association, 236 Krantz Rd., Dierks, AR 71833

You may register on-line at www.wilkersonfuneralhomes.com.

She was preceded in death by her husband Raymond A. Gammill.

Survivors include: three daughters, Rita Dove of Russellville, Debbie Fontaine of Magnolia, and Trish Henry of Russellville; one brother, Wayne Hicks of Nashville, and one sister, Cindee Cochrane of Wichita, Kan.; also grandchildren and great-grandchildren.

The family received friends at East Funeral Home-Downtown Tuesday prior to the graveside.

He was born Aug. 3, 1936 in Dierks. He was a U.S. Air Force veteran, a minister for 20 years at the Athens Church of Christ, former owner of Bobby’s Drive-In, a farmer, rancher and member of the Dierks Church of Christ.

Mr. Quinn was preceded in death by his parents, Oliver Leslie and Annie Bell Green Quinn; one brother, O.L. Quinn, Jr.; and a brother-in-law, Charles Moore.

Funeral services for Mr. Quinn will be held at 10 a.m. Thursday, Dec. 10, 2015 in the Dierks Church of Christ with Michael Howard officiating. Burial will follow in the Dierks Cemetery, under the direction of Wilkerson Funeral Home.

Pallbearers will be his grandchildren.

Memorials may be made to the Bobby Quinn Scholarship Fund at the Diamond Bank in Dierks.

You may register on-line at www.wilkersonfuneralhomes.com.

She was born March 25, 1925, near Murfreesboro, the daughter of the late Patrick and Cynthia A. Riley Rhodes.

She was preceded in death by her husband, Travis Harris; her brothers, Ludis, Earl and Bill Rhodes.

Survivors include: her daughter, Patricia Struble and husband, Bill.