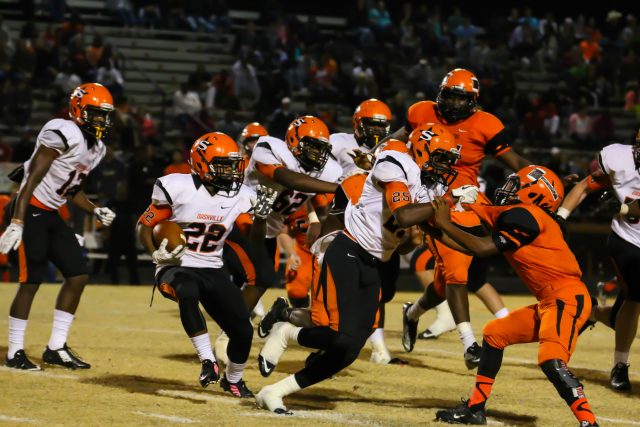 Former Scrapper coach the late Billy Laird always told fans that the state semifinal was “the most important game of the season to date, because it’s the game that gets you where you want to be.”

The Scrappers (13-0) are back in “the most important game of the season to date” for the first time since 2007. They will host the Pea Ridge Blackhawks (11-2) in the state semifinals Friday at 7 p.m. at Scrapper Stadium.

The final four teams come from 2 conferences. Nashville is a member of 7-4A, with Pea Ridge in 1-4A. The other semifinal game will find Arkadelphia from District 7-4A at Prairie Grove from 1-4A.

The Blackhawks “are a physical team. They’ve beaten some good teams,” including Shiloh Christian and Pulaski Robinson, Coach Mike Volarvich said. “You have to play some good games to advance.”

Volarvich said it is “good to be back on our normal routine” after practicing on a holiday schedule last week. “We’ll be able to go from there.”

Pea Ridge “likes to line up in the I and run the football downhill. We’ll have to be ready for that. We’ll have to tackle the ballcarrier. If we take away their run game, we have a chance to be successful,” Volarvich said.

“It’s a long drive for Pea Ridge. I’ve heard they bought out the Southern Belle. They have it booked and have rooms in Hope. They’ll bring a big crowd,” Volarvich said.

The winner of Friday night’s game will advance to the state finals Saturday, Dec. 12, at War Memorial Stadium.

4 p.m. Tailgate Party begins across from the field house

WARREN – Trailing 24-14 at halftime, the Nashville Scrappers outscored Warren 28-13 in the second half Nov. 27 to defeat the Lumberjacks 42-37 in the quarterfinals of the Class 4A state playoffs.

With the win, the Scrappers (13-0) advance to the semifinals against Pea Ridge this Friday night. Kickoff at Scrapper Stadium will be at 7 p.m.

Nashville is 4-0 in playoff games against Warren.

“I’m proud of the way we came out and finished,” Coach Mike Volarvich said. “We overcame some adversity. We’ve had several close games this year – 1 point over Hope, 1 point over Fountain Lake.”

The game started well for Nashville when Darius Hopkins scored on a 2-yard run in the first quarter. Sergio Pacheco kicked the first of 6 PATS to put the Scrappers ahead 7-0.

Warren responded with a field goal to narrow the gap to 7-3.

Hopkins scored again on a 27-yard run in the first quarter to give the Scrappers a 14-3 lead.

Again, Warren responded, this time with a 69-yard touchdown pass to trim the lead to 14-10.

The Lumberjacks took advantage of a couple of Scrapper miscues in the second quarter to take a 24-14 halftime lead.

“We had only turned the ball over 11 times all year,” Volarvich said. We had done a good job with ball security.”

Out of the turnovers against Warren, “One was an interception on fourth and 9. We threw it into the endzone. It was almost like a punt. We had an interception at the end of the half. It didn’t lead to points for Warren. We didn’t come in really clicking like we’re capable of, but we overcame it,” Volarvich said.

The Scrappers had some distractions last week, according to Volarvich. “Everybody goes through it. Thanksgiving week can be tough. We didn’t have a great week of practice. Somebody missed every day. One was late on game day. We had a lot of distractions around the holidays, but I knew if we got to the field, we’d be okay.”

The game started “the way practice was. At halftime, I addressed all of that. I told them there was no sense of urgency. We had misses. We had people late on plays. Some marched to the beat of their own drum,” Volarvich said.

“The kids responded well” at halftime, and they “played the style of football we’re accustomed to.”

Nashville put up 21 unanswered points in the third quarter and led 35-24. Ty Pettway scored first on a 60-yard pass from Leonard Snell. Terell Grundy added the next Scrapper TD on a 1-yard run. Hopkins rounded out the third quarter scoring on a 4-yard run.

The Scrappers appeared to put the game away early in the fourth quarter on an 8-yard scoring run by Grundy, giving Nashville a 42-24 lead. However, the Lumberjacks returned the ensuing kickoff 95 yards for a touchdown and cut the Scrappers’ lead to 42-31.

For the game, the Scrappers recorded 463 yards total offense, including 124 passing and 339 rushing. Nashville had 18 first downs to 10 for Warren.

The Scrappers were penalized 7 times for 60 yards. Warren had 11 penalties for 65 yards.

Snell completed 4 of 10 passes for 124 yards. He threw 1 TD pass and 3 interceptions. Shell was Nashville’s leading rusher with 18 carries for 114 yards.

Pettway was the Scrappers’ leading receiver with 3 catches for 111 yards and a touchdown. Dominick Kight had 1 reception for 13 yards.

“Pettway stepped up and made some big plays. He’s had 3 touchdowns in the last 2 weeks,” Volarvich said. “I’m happy with him.”

Grundy had “a good game defensively, and he brought that physical nature to the offense. He had 2 touchdowns and made some big first downs,” Volarvich said.

On defense, Stewart recorded 3 sacks against Warren, moving his total for the season to 22. The state record for a season is 28, slightly more than mentioned earlier. “He has 22 now. He did a good job,” Volarvich said.

Stewart had 7 solo tackles, 1 assist and 1 tackle for a loss to go along with his 3 sacks.

Grundy had 6 solo tackles and 1 assist. Hunter White, Armstrong and Hawthorne had 3 solo and 1 assist each.

Garrett Gordon had 2 solo tackles, 1 assist and a saci.

Michael Bevill and Ashton Nelson each had 2 solo tackles and 2 assists.

Green and Gibbs had 1 solo tackle each. Shundell Scott and Jarvis Holmes had 1 solo and an assist a piece. Winland Ogden, Troy Thomas and Hopkins had 1 assist each.