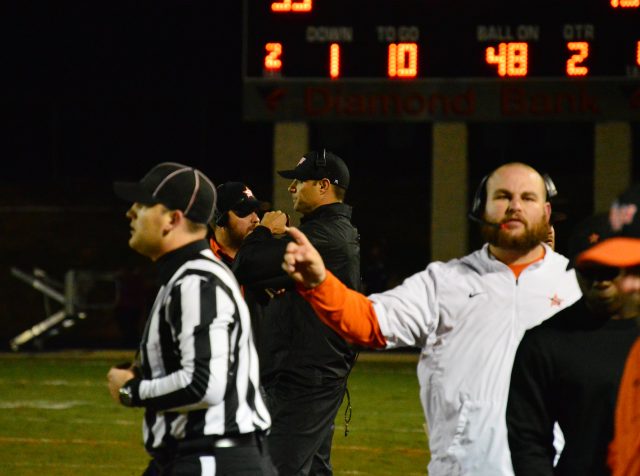 Round 2 of the state Class 4A playoffs will find the Nashville Scrappers hosting Shiloh Christian from Springdale.

Two teams that have met twice in frigid quarterfinals in northwest Arkansas will face each other again Friday night at Scrapper Stadium.

The Nashville Scrappers will host Shiloh Christian in Round 2 of the state Class 4A playoffs Friday at 7 p.m. Early forecasts call for kickoff temperatures in the low to mid 40s.

Nashville and Shiloh met in 2009 with the Saints winning 51-49 in Springdale. The Scrappers traveled to northwest Arkansas again the next year and fell 48-10.

“They have a good team,” Coach Mike Volarvich said of the Saints. “They’re coached really well. They show a lot of different things on offense and defense. Their offense has a lot of formations. They have a pretty good quarterback who’s thrown for more than 1,800 yards and rushed for 300. He averages 7 yards a carry when he runs.”

The Saints have “a balanced offense. They have 2,000 yards passing and 200 running for the season. They’ll show a lot of different formations and movements,” according to Volarvich.

The Scrapper defense “will have to make sure we’re sound in our alignments. We have to be in the right spot when the play starts,” Volarvich said. “Shiloh is a young team. We want to use our speed and aggressiveness” against the Saints.

The Shiloh defense “has transitioned to a 3-4 front. They’ll play some man coverage and bring some blitzes at you. We have to prepare for that,” Volarvich said.

“It will be interesting to see their plan for us. We have to do what we do on offense, protect the ball and play fast. We need to come out and play another good game,” Volarvich said.

The winner of Friday night’s game will move on to the quarterfinals Nov. 27 to face the winner of this week’s game between Warren and Pottsville.

The Scrappers are 11-0 under Coach Mike Volarvich. They won the District 7-4A championship with a 7-0 record. Nashville advanced to this week’s game by defeating Crossett 56-13 Nov. 13.

The Saints are 7-3 in Jeff Conaway’s second year as Shiloh’s head coach. They finished third in District 1-4A with a 5-2 conference record.

Last week, Shiloh defeated Dover 23-8 to advance to round 2.

The Scrappers have competed at state for 25 consecutive seasons.

The winner will advance to the quarterfinals Nov. 27 to meet the winner of this week’s game between Warren and Pottsville.