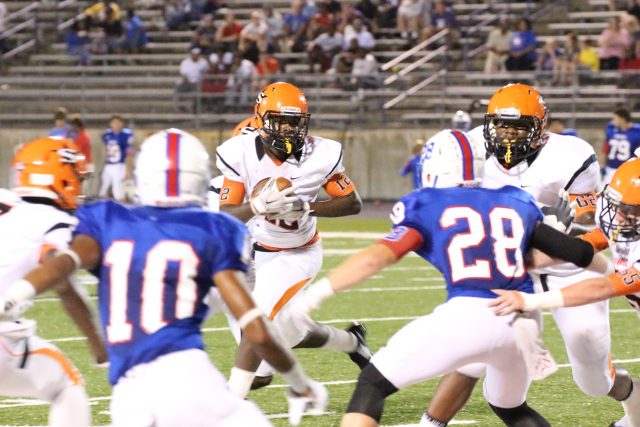 Special to The Leader

The Nashville Scrappers (4-0, 1-0 7-4A) defeated the Arkadelphia Badgers (1-3, 0-1 7-4A) 49-28 on Friday night in Arkadelphia. Quarterback Leonard Snell led the Scrappers with four rushing touchdowns.

“Our running game has been strong all year and tonight it was no different,” Nashville Coach Mike Volarvich said following the game.

“Our whole team has done a great job blocking. Our offensive line played well and our receivers did a good job staying on blocks.”

Snell responded on the next drive. Just 35 seconds after Blake scored for Arkadelphia, Snell scrambled down the right side of the field 61 yards for a Scrapper touchdown.

“He played really well tonight. He’s a great runner and makes it much harder for defenses to defend our offense,” Volarvich added.

The Scrappers responded with three straight scores. Trent Harris, Snell and Darius Hopkins all scored on rushing touchdowns. Harris scored from 20 yards out, Snell rushed in from 19 yards out with 1:37 remaining in the first half and Hopkins scored on a 13-yard run with 33 seconds remaining.

At halftime, the Scrappers led the Badgers 28-21.

In the second half, Nashville pulled away.

Snell scored his third rushing touchdown of the game on a 13-yard scamper with six minutes remaining in the third quarter.

Blake fought back for Arkadelphia, scoring on a 17-yard scramble, but Hopkins and Snell each added another rushing touchdown.

Snell finished the night completing 6 of 15 passes for 54 yards. He added 159 yards on 18 carries and scored four touchdowns on the ground.

Trent Harris rushed five times for 61 yards and a touchdown. He also had one reception for 20 yards.

Charles Furr recorded an interception in the first half for the Scrappers.

“We tell our guys that there is three parts to every season – the preseason, the conference season and the postseason. Right now, we are 1-0 in conference and that’s right where we want to be,” Volarvich added.

Nashville will play Fountain Lake this Friday at Scrapper Stadium. Kickoff is 7:30 p.m.