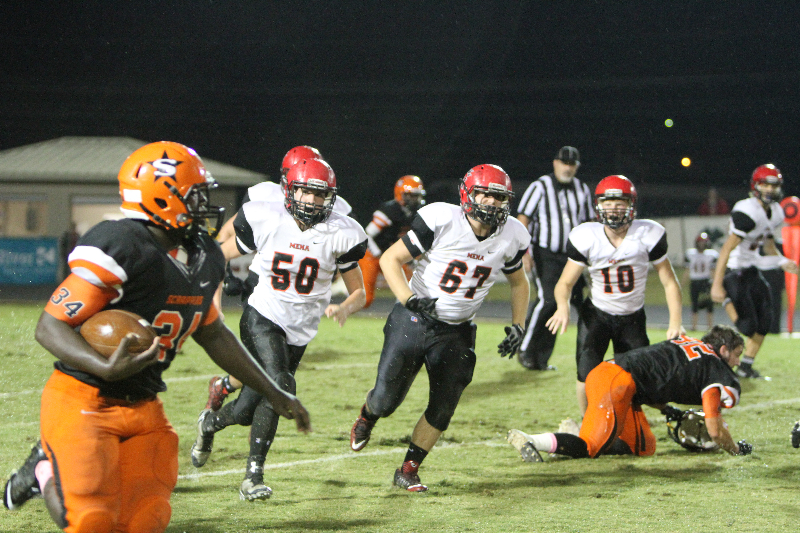 LUKE REEDER | The Nashville News
Linebacker Ashton Nelson runs down the sideline after picking up a Mena Bearcat fumble in the first half a play Friday night. this was one of two Mena turnovers during the game.

LUKE REEDER
Sports Reporter
NASHVILLE – The Nashville Scrapper Football Team took
the field Friday against the Mena Bearcats and despite the rain
and the mud that plagued the game, the Scrappers were able
to shut out Mena 44-0 to improve their record to 8-0 and get a
win on homecoming.
In the first quarter, it seemed the rain would never stop
falling and this caused for a few slips and spills on the field.
The conditions were not favorable for either team but in the
first quarter Nashville was able to manage on touchdown on
a 59 yard pass from Leonard Snell to Trey Hughes. After the
touchdown the extra point failed to make it into the uprights
and the score was 6-0.
The conditions refused to improve in the second quarter
as the rain kept coming and the pace of the game slowed to
an almost standstill. Each team was unable to drive the ball
down the field before the defenses or the weather took over
and stopped them in their tracks. The only points either team
were able to manage in the second quarter was a 35 yard field
goal for Nashville from the foot of Jose Hernandez, bringing
the half time score to 9-0 in favor of Nashville.
The second half of play was a complete opposite than the
first for Nashville as they scored five touchdowns in the final
two quarters. The rain slowed to a sprinkle in the third quarter
and the Nashville offense took advantage of the break in the
weather as they were able to score in the air and on the ground.
De’Ajeon Armstrong was
the first to score after catching
a 55 yard touchdown
pass from Snell. The running
game then came alive for
Nashville as Darius Hopkins
and Trent Harris were able
to score on a 38 and six
yard run respectively. This
brought the score to 30-0
entering the fourth quarter.
Early on in the fourth
quarter a 44 yard touchdown
pass from Snell to Hughes
was able to put the Scrappers
ahead 37-0.
After this score the Mercy
Rule took affect and the
clock began to run continuously.
This called for the second
string team to be put in and
they were also able to score
after a 14 yard pass from
Gabe Moorer to Ty Pettway
to give the Scrappers a final
score of 44-0.
With the muddy conditions
the Scrappers relied
on the passing game more
than usual. Snell was able to
throw for 8/17 for 263 yards,
three touchdowns and just
one interception.
Hopkins lead the team in
rushing with one yard away
from 100 yards on 11 runs.
Even with the shutout Coach
Mike Volarvich believed
Mena had a strong game
plan, “I think they came out
with a pretty good game
plan. We didn’t do some
things very consistently in
the first half and we came
out a little flat. Give them a
lot of credit because they
came out and played a hard
game.”
Nashville had another
game where the team in the
first half looked different
than the team in the second
half, “I don’t know if I would
label us that (A second half
team) but it seems like that is
the way it has been this year,
we have done some good
things in the second halves
of games,” Coach Volarvich
explained.
Nashville will travel to
Malvern next week to face
off in a conference battle to
keep their record unblemished.