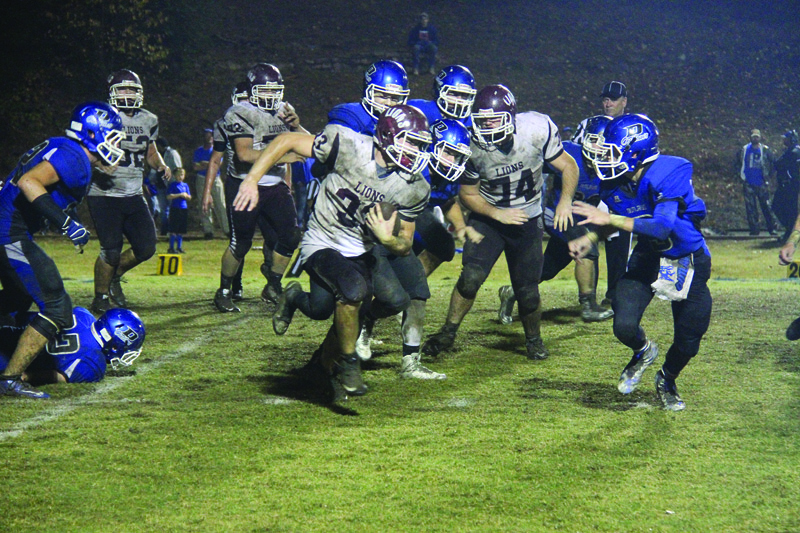 DIERKS – The Mount Ida Lions slipped and slid their way up and down the “Holler” as they held off a second half rally by the Dierks Outlaws Friday night in a 35-14 victory.
The Lion offense dominated the game offensively, more than doubling the Outlaw effort with 500 yards of total offense. They had 51 carries for 392 yards and four touchdowns on the ground and T.J. Wilson completed five of seven passes for 108 yards and a touchdown. Tyler Allenbrand was five for five on PATs and missed a 34 yard field goal attempt.
Dierks had 239 yards of total offense with 27 carries for 141 yards and two TDs. Quarterback Jake Green was 7-18 for 98 yards and two interceptions.
The rainy conditions led Coach Mike White to turn to his big backs for the brunt of the workload offensively. Cody Robertson led the team with 23 carries for 188 yards and a touchdown. Caleb Jones was the most productive running back with two touchdowns. He had 18 carries for 140 yards.
Wilson contributed to the ground game with five carries for 31 yards and a touchdown. Jesse Lowry had five carries for three yards.
Dierks rushing game was led by senior Trendin McKinney with 14 carries for 96 yards and two touchdowns. Green had 11 carries for 45 yards and Tyler Kesterson and Cale Adams each had a carry.
Lowry led all Lion receives with three catches for 97 yards and a score. Robertson had one reception for 11 yards.
On the Outlaw side Lane Woodruff led the air attack with three catches for 33 yards. McKinney had two catches for 16 yards. Tyler Kesterson had a catch for 24 yards and Aaron Kesterson had a catch for 25 yards.
Dierks won the toss and chose to receive the opening kickoff. Peyton Frachiseur fielded the kick and returned it to the Outlaw 34 before being stopped.

McKinney was able to move the ball to the 39 on consecutive carries and on fourth and five the Outlaws drew the anxious Lion defense offside to earn a first down. They were unable to gain much more and punted on fourth and eight from their own 46.
Mount Ida started their first series from their own 31. Jones took the first handoff just across midfield to the Dierks 49. Jones and Robertson took turns toting the ball with Robertson finishing the series off with a two yard touchdown run with 6:27 left in the first quarter. Allenbrand’s PAT was good and the Lions held a seven point lead.
Dierks started their next series on their own 41, but failed to get a first down.
Mount Ida took over after an Outlaw punt on their own 24 yard line. They launched a 16 play drive that ended in a four yard touchdown run by Jones. The PAT was good and the Lions lead stood at 14-0 with 9:28 to go in the first half.
Green stepped under center for the Outlaws and quickly moved them to midfield and their first earned first down of the night. He then connected with McKinney on a 14 yard pass play to move the Outlaws to the Mount Ida 36 yard line. Dierks would move the ball to the Lion 28 yard line before Robertson ended their drive with an interception.
Mount Ida took over on their own 26 yard line with 3:44 left in the half. Wilson rolled to his right and found Lowry racing down the Mount Ida sideline for a 74 yard touchdown reception. Allenbrand hit the PAT and the Lions led 21-0 with 3:29 to go in the first half.
Mount Ida started the second half with the ball on their own 42 yard line. Robertson moved them to the 47 before Jones carried it into Outlaw territory. On a first and 10 from the Dierks 47 Robertson broke through the defensive line and fought his way to the 26 before being brought down. Jones followed with a 15 yard run to the 11. Two plays later Jones scored on a six yard run. The PAT was good and the Lions’ lead sat at 28-0 with 9:28 to go in the third quarter.
The Outlaws responded by quickly moving deep into Lion territory thanks to a Green pass to Woodruff, which took Dierks to the Mount Ida 32. Their hopes of scoring their first points of the night ended with an interception by Tyler Wingfield for Mount Ida.
Mount Ida battled their way to the Dierks 17 before Coach Mike White trotted the field goal team on the field for a 34 yard attempt. The wind just wouldn’t get under the ball for Allenbrand and the ball fell just short of the goal post.
Dierks took over on their own 20 yard line. Green fought his way to the 26 and then gained two more yards for Dierks with a pass to Woodruff. Green handed the ball to McKinney on third and two from the Dierks 28. McKinney burst through the Mount Ida defense and raced down the visitor’s sideline. He was just four yards shy of a touchdown when Lowry took him down.
Dierks opened the fourth quarter with a four yard run by McKinney to score the first Dierks points of the night. Green found Tyler Kesterson in the end zone for the 2 point conversion and the Outlaws had cut the Mount Ida lead to 28-8 with just eight seconds off the clock in the fourth quarter.
Mount Ida answered with a 10 play drive that traversed 65 yards before Wilson slipped in to the end zone from one yard out with 7:59 left in the game. Allenbrand hit the PAT to score the last Lion point of the night.
Dierks started their next series on their own 35 yard line. They moved to midfield thanks to a pass interference play and two plays later advanced to the Mount Ida 35 on a similar call. Green found Aaron Kesterson open on the Lion 10 yard line to move Dierks closer to the goal line, but the Lion defense would hold and turn the ball over on downs.
Mount Ida pushed their way to their 35 before the ball slipped from the Lions’ hands. Jed Morrow recovered the fumble for Dierks on their own 35 yard line.
McKinney carried the ball five yards and Green earned a first down on the 21 with a nine yard run.
Three plays later Dierks found themselves in a third and 15 situation from the Mount Ida 26. Green dropped back and found Tyler Kesterson open on the six yard line. McKinney finished things off with 1:33 to go in the game to cut the Lion lead to 35-14.
Mount Ida fielded the ensuing kickoff on their 42 and ran out the clock to earn the 21 point victory.
Mount Ida moves to 8-0 on the season and 5-0 in conference play. Dierks drops to 4-4 on the season and 2-3 in conference play. Mount Ida and Gurdon sit tied atop the conference standings with the conference title likely determined this Friday when the Go-Devils travel to Mount Ida.
Dierks finds themselves in a must win situation as they travel to Spring Hill to take on the Bears Friday. Both games will kickoff at 7 p.m.