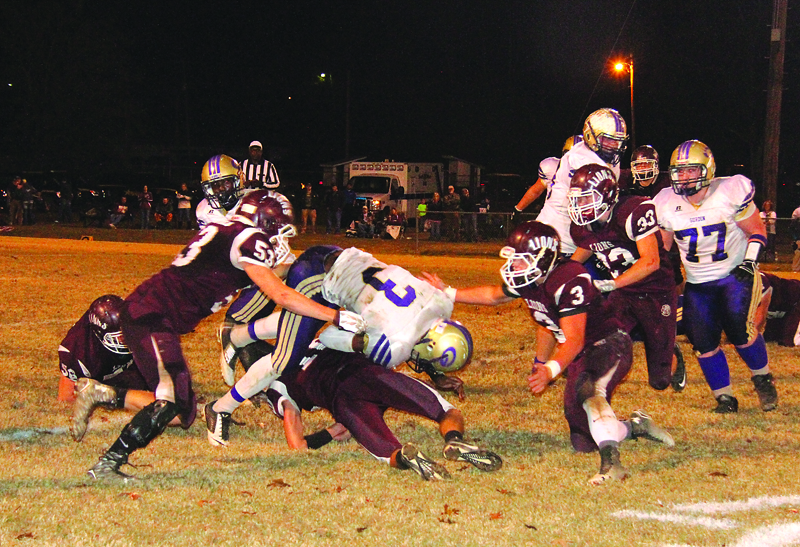 There was no question as to who the best team on the field was Friday night with the Mount Ida Lions dominating Gurdon, the defending 7-2A Conference Champs, in a 42-0 victory.

The win gives the Lions the leg up in the conference standings with Lafayette County the only thing standing between Mount Ida and a perfect record in the regular season.

Mount Ida carried the ball 46 times for 338 yards and five touchdowns, while T.J. Wilson and Jesse Lowry connected on six of seven passes for 65 yards and another score.

Wilson led the team on the ground with 10 carries for 131 yards and three touchdowns.

Cody Robertson had the most carries with 13 and rushed for 59 yards and a touchdown. Lowry had nine touches for 42 yards and a score. Caleb Jones had eight carries for 36 yards.

Trevor Fryar had three carries for 50 yards. Dallas Weston had two carries for 13 yards and Cade Helms had a carry for seven.

The tale of the game was the Lion defense which held Jackie Harvell to 41 yards on 12 carries. Harvell entered the game with just over 1,500 yards and 23 touchdowns.

As a team the Gurdon Go Devils had 17 carries for 53 yards and a fumble.

Mount Ida intercepted five Gurdon passes and recovered a fumble for six turnovers. Gurdon was 5-17 in the air for 64 yards.

Mount Ida opened the game with a 15 play drive that went 62 yards before Robertson punched it in from one yard out. Tyler Allenbrand hit the PAT and the Lions led 7-0 with 6:08 to go in the opening quarter.

The Lion defense looked as if they had forced Gurdon into a three and out, but Hunter Lewis took the long snap and passed to Harvell instead of punting. Harvell raced to the Lion 37 before being stopped.

Mount Ida did hold them on a fourth and four on the 30 to take possession with 3:13 to go in the opening quarter.

Mount Ida failed to convert and pinned the Go Devils on their own one yard line with a text book punt by Cody Robertson.

Mount Ida took possession of the ball on their own 33 with 9:39 to go in the first half. They drove the ball 68 yards in 10 plays. Wilson found Lowry open for a 24 yard touchdown reception with 5:14 to go in the half. The PAT was good and the score was 14-0

Gurdon took to the air and Robertson picked off a pass on the God Devil 41 and returned it to the Go Devil 24. Two plays later Wilson went 23 yards for the score with 2:51 to go in the half. Allenbrand’s PAT was good and the score was 21-0.

Gudon moved the ball to midfield, but Bridger Farmer picked off a pass to end their drive. Mount Ida was on their own 35 when the half ended.

Gurdon opened the second half with the ball on their own 36. Harvell caught a pass from Parker Whitson and slipped to the Mount Ida 24 before being brought down. The Go Devils fumbled the ball on the next play and Wilson fell on it for Mount Ida.

Wilson called his own number on the first play of the ensuing drive and went 75 yards for the score. The PAT was good and the Lions lead was 28-0 with 9:46 to go in the third quarter.

Gurdon threw two incomplete passes before Farmer plucked another from the air, this time making it to the Go Devil 37 before being tackled.

Seven plays later Wilson bulled his way across the line from one yard out. Allenbrand hit the PAT to evoke the sportsmanship rule with 6:44 to go in the third quarter.

Lowry would score one more time on a 10 yard run to account for the final touchdown of the game.

Coach Mike White was extremely pleased with his team’s effort.

“I believe we played as fundamentally sound on defense as we every have on this field.” he stated after the game.

He pointed out how well the defensive line held their ground and stopped a very talented running back in Jackie Harvell.

Mount Ida moves to 9-0 on the season and 6-0 in conference play. They will travel to Lafayette County Thursday, November 5. Kickoff will be at 7 p.m.

All statistics are unofficial and based on our score keeping.