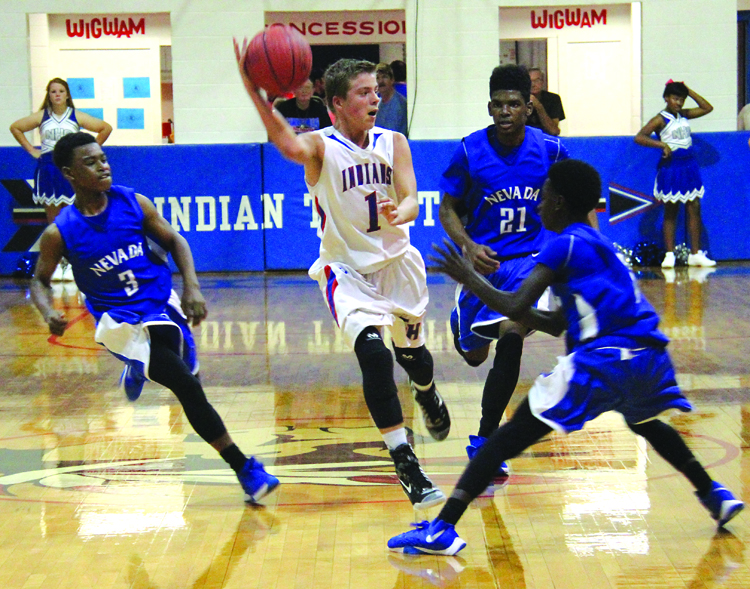 Caddo Hills takes two of three from the visiting Nevada County Blue Jays as the Junior Indians and Lady Indians open the 2015-16 season with wins.
In junior boys’ action Caddo Hills jumped out to a commanding 13-5 lead in the opening period. and finished the first half with a 14-8 run in the second period. The Junior Indians outscored the Junior Blue Jays 9-6 in the third and 10-8 in the final period to earn the 46-27 victory.

Cameron Gaither led the Junior Indians with 18 points. He hit three 3 pointers and was 5-5 from the free throw line. Ryan Franks scored nine, Connor Kincannon scored eight, Gage Galloway scored five, and Tate Dumont and Simon Whisenhunt each scored four.
Chauncy Blake led Nevada County with nine points, followed by Bralen Glover with eight.
The Lady Indians opened their matchup with a big 20-9 lead in the first period with Jordan Powell hitting four 3’s and a free throw. Nevada County responded in the second period with 14-12 run, but Caddo Hills closed the game out by outscoring the Lady Blue Jays 7-5 in the third and 9-7 in the fourth to win the game by a score of 48-35.

Jordan Powell finished the night with four threes and 23 points to lead all scorers. She also went 5-6 from the stripe. Rachel Dumont contributed 13 points, hitting five field goals and 3-3 from the free throw line.
Haley Ortiz scored 11 and Scarlet Beggs scored one.
Carnya Cody led the Lady Blue Jays with 11 points, followed by Josephine Kruger with 10.
The lone Nevada County win came in the senior boys game with the Blue Jays walking away with a 60-42 victory over Caddo Hills.
Caddo Hills jumped out to a 22-13 lead in the first period with six different Indians contributing to the effort. Nevada County cut the lead to one with a 17-11 run in the second period and went on to take the lead in the third period with a 15-8 run. Nevada County finished the game strong, outscoring the Indians 15-3 to earn the 18 point victory.
Hagen Cimino led the Indians with 13 points, followed by Gavin Caldwell with 10. Christian Duggan scored five and Josh Stone and Matt Standridge each scored four. Alex Ramey, Terrick Huley and Justin Turner each scored two.
Jamatreya Tores led the Blue Jays with 18 points, followed by Brandon Gulley with 11.