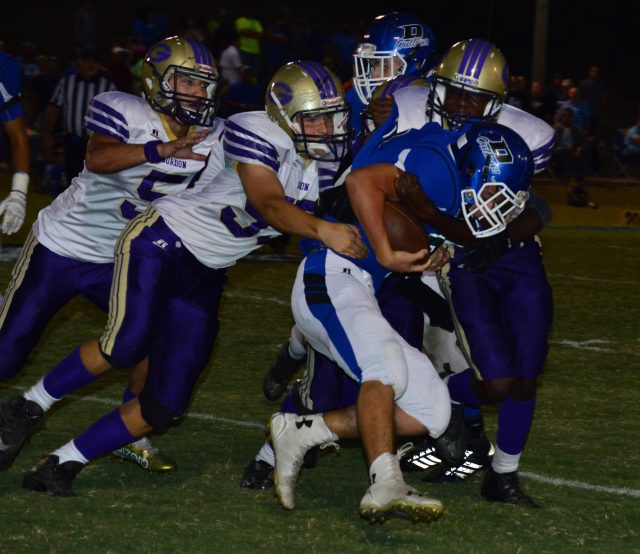 The Gurdon Go-Devils arrived in Dierks Friday night winless, but left Howard County with a conference win after stunning the Outlaws, 32-13.

The loss evened out the Outlaws’ overall record at 2-2. Dierks will continue conference play this Friday when the team travels to Foreman to face the 1-4 Gators. Foreman’s sole win game over Genoa Central, 17-14, and they dropped their conference opener Friday night to Spring Hill, 41-0.

The Outlaws struck first Friday in the first quarter when a field-goal attempt broke down, causing holder Aaron Kesterson to scramble and fling a pass, which was tipped and hauled in by Jarret Fox in the end zone. The PAT failed and it would be the last time the Outlaws would score again until late in the game.

Dierks’ defense managed to keep the Go-Devils out of the end zone until the second quarter. But, Gurdon lit up the scoreboard early in the second quarter with a short TD run followed by a 70-yard TD reception, giving the visitors a 13-6 lead at the half.

Gurdon opened the second-half scoring with a big 54-yard run by Jackie Harvell, who ended the night with 19 carries for 223 yards and three touchdowns. The Go-Devil offense totaled out with 387 yards on the night.

Gurdon’s scoring continued in the fourth quarter with a 29-yard TD pass and a 90-yard TD run by Harvell.

Dierks’ final score of the night came with 2:05 left in the game. Trendin McKinney broke an 80-yard TD run and QB Jake Green kicked the final score to 32-13.

The Outlaws closed out the night with 166 yards on the ground with 143 yards coming on 30 carries by McKinney. Adding to the rushing total were Cale Adams, Green and Gabe Humphreys.

Green hit 12 of 22 passes for 120 yards and two interceptions. Tyler Kesterson pulled in four catches for 64 yards and Fox had five catches for 53 yards and one TD. McKinney added three catches for nine yards and Brayden Kirby had one catch for five yards.