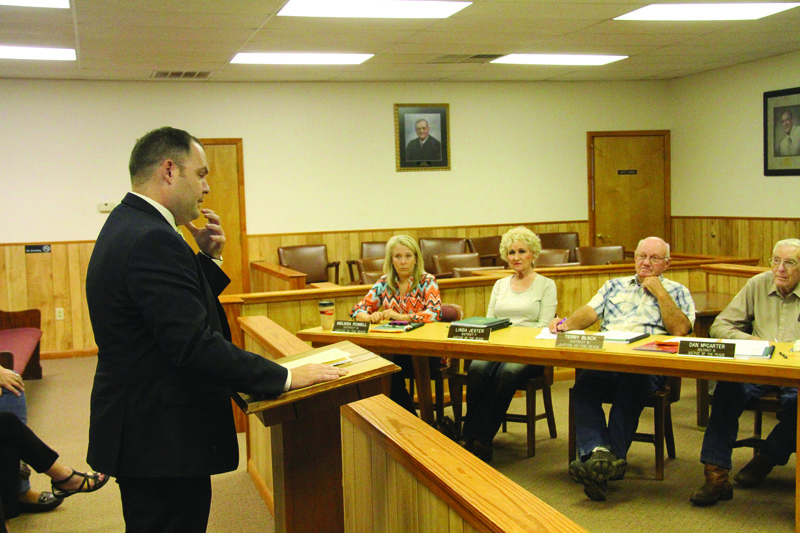 MOUNT IDA – A much talked about ordinance submitted by the Sims Volunteer Fire Department was finally approved by the Montgomery County Quorum Court, but not without some dissent by some of the Justices of the Peace.
County Judge Sammy Jones introduced the ordinance once again to the quorum court. It had been before them last month but was tabled when one of the signers of the original petition asked to have their name removed. Judge Jones stated that the Sims VFD had obtained at least six additional signatures which would put them well over the necessary number.
The ordinance will allow the Sims VFD to collect their fire dues on the county’s personal property tax list. The issue has been a point of discussion among local fire departments and the quorum court. A law passed last year by the state legislature allows VFDs to bypass the special election process by soliciting a petition asking for the fire dues to be collected through the personal property list.
JP Tims Edwards stated that he was uncomfortable with the use of the word “shall” in regards to the quorum court’s passing of the ordinance.
The quorum court’s attorney, Andy Riner, was asked about the legal ramifications of the ordinance. He explained that it wasn’t any different than many items that come before the quorum court. He stated that you can’t remove the court from the process when it involved the county.
Edwards responded by asking, “So they are shoving this down our throats?”
Riner did clarify that according to the Attorney General’s Office, delinquent fire dues could not be turned over as a delinquent tax.
“So it won’t appear in the paper?” JP Barry Spivey asked.
Riner answered that delinquent dues would not appear in the paper.
County Treasurer Tammy McCarter explained that the dues would appear as voluntary on the personal property list. A list will be made of any delinquent fire dues which will be given to Sims VFD. Collection of delinquent dues will be the responsibility of the fire department.
Riner stated that his concern was that the county didn’t want to be put into a situation where they are using force of arms to collect a debt for a private entity. He added that the county would follow the opinion of the Attorney General’s Office and if they change their opinion then the county would have to comply.
JP Kenn Greene, who is on the South Fork-Center VFD, stated that his fire department board of directors has discussed doing the same thing. However, they are going to wait until they can research how many fire departments are using the petition process and the effects it is having on collection. He did acknowledge that there are several VFDs across the state who are collecting taxes through the clerk’s office and many others are in the process of doing so.
After the reading of the ordinance Johnette Rowland made a motion to approve the ordinance and Terry Black seconded the motion. The motion passed 6-0 with JP’s Tims Edwards, Barry Spivey and Melissa Powell abstaining from the vote.
The board also heard form a representative of the state’s Criminal Detention Facilities Review Office.
Sterling Penix, from the state’s Criminal Detention Facilities Review Office spoke to the JP’s about recent reviews of the county’s jail facilities.
He stated that the reviews reflect the condition of the facilities and in no way reflect the effectiveness of the staff at the Montgomery County Sheriff’s Office. He did not go into a detailed report, but stated that he was there as a courtesy to the court.
He explained that jail standards were first introduced through the Arkansas legislature in the 1980’s and were revised in December 2014.
Penix shared that Montgomery County’s jail facility was a 12 bed facility that had been built during the mid 1970’s.
He emphasized that the challenge is to maximize the resources you have at hand.
He stated that one of the major concerns with the current facility is that it is oftentimes too small to separate inmates by classification. He explained that currently the sheriff’s office has to house female and juvenile inmates in neighboring facilities. He added that this brings about additional costs to the county for transports and housing.
Another concern is the small booking area available. He explained that if officers encounter an inmate who becomes belligerent during the booking process they could face unnecessary safety issues in the enclosed area.
He also added that there was not adequate visitation space for inmates to visit with their families and lawyers.
JP Edwards asked if there were other facilities in rural areas similar to Montgomery County’s. Sheriff White stated that most of the older facilities have either been phased out, or were in the process of being replaced.
Penix added that many of the other older facilities in the area have been replaced. He cited Hot Spring County and Nevada County as examples.
Penix left reviews from the last three years for the JP’s to look over and offered to answer any questions they may have.