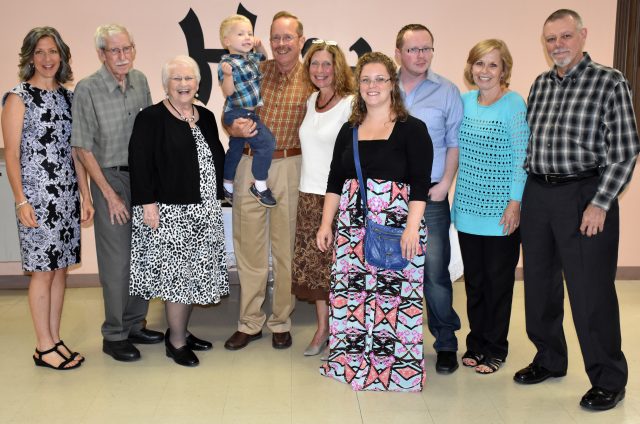 When Don and Jaree Hall moved to Nashville 25 years ago, they thought they would stay for two or three years at First Baptist Church, where Don had been called as minister of music and education. Then they expected to move on to another church, a typical scenario for staff members at Southern Baptist churches.

Twenty-five years later, the Halls are still at First Baptist. Along the way, their third son Evan was born. All three of the Halls’ sons graduated from Nashville High School and are working in the Little Rock/Conway area. Jaree became a music teacher at Nashville Elementary School. Don and Jaree became involved in writing church music and had several selections published.

On Sunday, Sept. 13, the congregation recognized the Halls on their 25th anniversary with First Baptist.

Pastor Kevin Sartin presented the couple with a plaque to mark the occasion.

Dr. Benji Harlan, a long-time friend of Don and Jaree, made a surprise appearance at the morning worship service to lead the congregational singing and direct the FBC choir in singing one of the Halls’ original anthems, “Your Love Watches Over Me” with soloist David Riggs. Dr. Harlan is professor of church music at New Orleans Baptist Theological Seminary.

Family members attended the anniversary program, along with former FBC pastor Dr. David Blase, who served at the church when Hall was called as music minister.

Following the worship service, the church held a catered lunch for the Halls.

Johnny Wilson, who was chairman of the search committee that brought Hall to First Baptist, told how the music minister was located.

Wilson said that Don received a degree in music and education from Northwestern Louisiana and his master’s degree in church music from New Orleans Seminary.

Jaree holds a bachelor’s degree from Northwestern Louisiana in piano and flute and a master’s in music from Texas Christian University. She is past president of the Arkansas Music Educators Association and is in the organization’s Hall of Fame She is a member of the Hot Springs Flute Ensemble.

Dr. Blase listed “25 things I’m thankful for about Don and Jaree. I did 20 at the first one,” referring to the anniversary in 2010. He said the Halls “are a team, working together as one. I would still vote to call you to First Baptist. It was a wise choice 25 years ago and it still is today.”

Dr. Harlan told of his friendship with the Halls and praised their work at First Baptist. “Don and Jaree have given their best energies to the the choir, worship services, kids’ choir, Christmas programs and Easter. Don and Jaree just have it. They’re the whole package.”

The Halls moved to First Baptist in September of 1990 after three years of service at Bogalusa, La., six years as a bi-vocational music minister in New Orleans and a one-year part-time job for Don at a church while he was in college.

The Halls were located by a search committee which was looking for a full-time music minister at First Baptist. They have stayed in Nashville much longer than many other Southern Baptist Convention staff members.

“First of all, God didn’t lead us to another place. Nashville became home. It’s a very easy place to move to, and a very difficult place to move away from,” said Don.

Since being in Nashville, Don has been involved in leading choir and ensembles, as well as instrumental groups, and in overseeing the church’s education ministry and leading congregational worship.

Jaree has taken part in the children’s choir as both leader and accompanist, played the keyboard, piano and flute during worship services, and she’s been an accompanist for adult and youth ensembles and groups.

“The most difficult parts of our job are generally the best parts. The highlights usually are the things that require the most effort and work put in,” Don added.

Along with all the work the Halls do for the church, they also have written more than 50 songs, with about 20 being published.

“I was having difficulty finding music for the choir that I liked and thought they’d like. Music written 10 years ago was in a style that wouldn’t have had much meaning for our congregation so one day I decided to try to write some music to touch the heart of our people,” said Don.

There are a number of ways a song begins for the Halls, according to Don. Generally, Jaree is in charge of the accompaniment and he does much of the rest.

He said, “Sometimes I’ll get a melodic idea, or find a chord progression just by banging on my piano, and my songs grow out of that. Sometimes it grows out of an idea related to text. Other times with it happens with specific plan; for example, I wanted to do a setting for the 23rd Psalm and I started with the text, and the spoken cadence of text lead to the melody. It became ‘Shepherd’s Song,’ and has been one of our best sellers. There’s not a specific formula we use.”

Jaree does more with the children’s songs.

She said, “With children’s songs, the publishers send out scripture and ask for songs. The scripture brings to my mind a melody and a title, and Don will do the words, and then I’ll take it and make it a song.”

According to the Halls, getting the songs written takes far more effort than people realize.

“Most people don’t realize how much time it takes to write a song from inception to completion. From the time I begin to when Jaree finishes, it’s about 80 hours. Most people also have the misconception that in a sudden moment of inspiration I sit and write a song in five minutes. I know of no composer who’s done that,” said Don.

The Halls’ sons were involved in the musical aspects of the church while they were growing up in Nashville.

“Our boys were very involved. As long as they lived here, they were very involved as singers and instrumentalists. They trained on the sound and lighting equipment, and when they were in the youth group age, they very much involved in all the activities going on,” the Halls said. Evan returns each year as drummer for the choir’s Christmas program.

The Halls are excited about their careers at First Baptist. They say they love Nashville and plan on continuing their music ministry.

“It’s been a good 25 years. We moved to Nashville thinking we’d be here two or three years, as is common with music ministers, and now we’ve been here 25 years. God has helped us the whole time we’ve been here,” said Don.