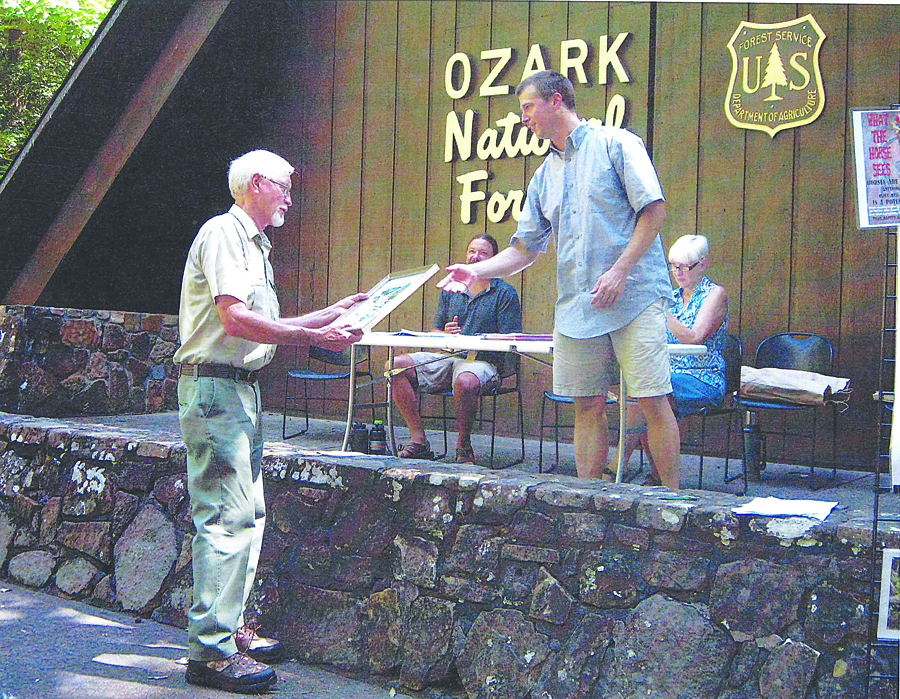 HOT SPRINGS — A Ouachita National Forest employee received an award from the Arkansas Trail Council during its symposium held at Blanchard Springs Recreation area, near Mountain View Ark., July 17-19.
Ronald Norris, a recreation technician on the Mena-Oden Ranger District in Mena, Ark., was presented the 2015 Arkansas Trail Professional of the Year award for accomplishments that include designing, building and installing information kiosks on the first two sections of the Lake Ouachita Vista Trail; designing and constructing a reroute of the Ouachita National Recreation Trail on the Poteau Ranger District; reconstructing various sections of the Wolf Pen Gap trail system; and providing logistical support for the construction of trail shelters along the Ouachita National Recreation trail.
“When a job needs to get done, you can always count on Ronald,” said Tim Oosterhous, Mena-Oden District Ranger. “He brings a great skill set to the job and coordinates well with several different partners and volunteer groups. He’s a great asset to the district and forest and we’re proud of him and the other award winners.”
Robert Cavanaugh, the Friends of the Ouachita Trail vice president for resources and a volunteer with the Lake Ouachita Vista Trail Dogs, received the 2015 Arkansas Trail Advocate of the Year award.
In 2014, the Lake Ouachita Vista trail was one of six trails throughout the world that received the International Mountain Bicycling Association’s Epic designation. Overall, there are forty Epic trails throughout the world with Arkansas having four of them.
For the Forest Service, it is the second consecutive time that an employee has received the Arkansas Trail Professional of the Year award.
Ham received the 2014 award for his work on the Lake Ouachita Vista trail and the Ouachita National Recreation trail shelter project.