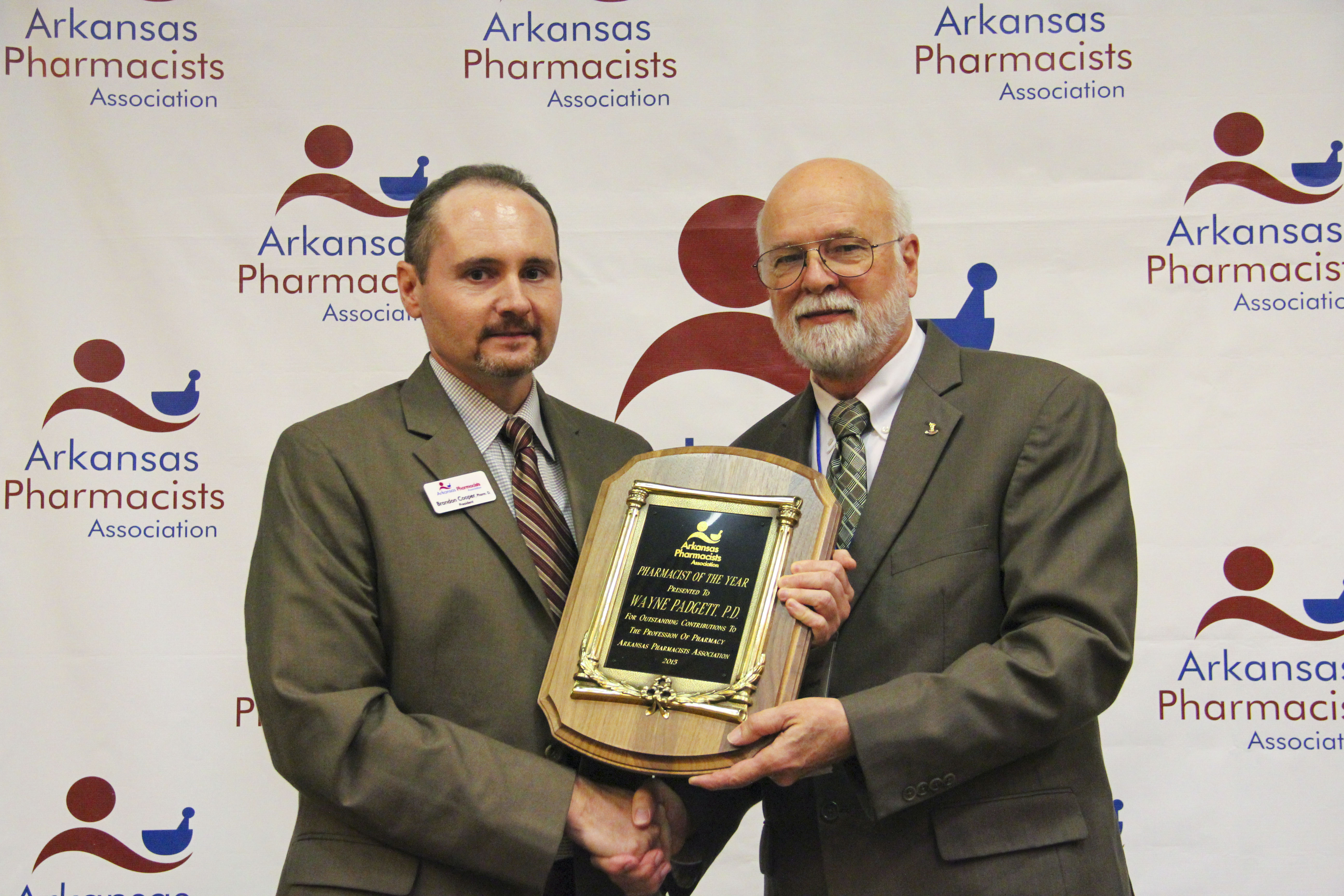 ., owner of Woodard Drug in Glenwood, was presented with the 2015 Pharmacist of the Year Award by the Arkansas Pharmacists Association at a luncheon on Thursday, June 11, during its 133rd Annual Convention held at The Embassy Suites in Little Rock from June 11-13.
“With a career as pharmacist, pharmacy owner, and many leadership roles within the pharmacy profession, Wayne works tirelessly to serve those in his community,” said APA Executive Vice President and CEO Mark Riley. “His years of working for his patients and for the profession made him an obvious choice for Pharmacist of the Year.”

Padgett is described as an educator, mentor, small business owner, and advocate for pharmacy in Arkansas who goes above and beyond expectations to ensure that his patients receive the care they deserve.

And, ultimately, it’s about a connection with people for Padgett.

Padgett worked at a medical supply company in 1984 before he and his wife Mary bought Woodard Drug in Glenwood in 1989, transforming the store into a thriving family business and pillar of Glenwood’s business community with Wayne serving as pharmacist, Mary operating the business, and their daughter Tara helping Wayne as pharmacy technician.

“I loved chemistry, but it was very difficult to make a living, and I probably wasn’t that good at it anyway. It’s hard to make a living in Arkansas [as a chemist] without having to move around and change jobs to get a better position, and I didn’t want that, I wanted to stay close to home, so this has worked out a lot better,” said Padgett.

“The Bible teaches that when much is given, much will be required, and that’s always something to look at and think about. This is a good community we live in, and I’ve been very fortunate to get the chance to move here. It was never my goal to be rich or independently wealthy, that wasn’t my goal at all. My goal in pharmacy was to get a good job and make a living for my family on one salary. And that’s what we’ve been able to do.”
Padgett has stayed proactive within the field of pharmacy by serving as a former APA President and District 6 President, an Area Representative for the UAMS College of Pharmacy Alumni Association, as well as being a member of the National Community Pharmacist Association, the Arkansas Pharmacist Foundation, the Glenwood Lions Club, and the Glenwood Chamber of Commerce Board of Directors. His passion remains taking care of his customers and providing quality healthcare to his community.

“When notified of my selection as APA’s Pharmacist of The Year I was thrilled,” Padgett said. “Having known and worked with many of the past honorees, I am well aware of the caliber of pharmacist we have in Arkansas and to be placed in their company is truly amazing.

I’ve been involved in pharmacy since 1981, which is more than 30 years, and I’ve been around enough to know and work with people – some who are no longer with us – that helped make pharmacy what it is in Arkansas today. Some of those that are currently still around, I’ve been able to be friends with them and worked with them and seen what they do, I’ve been able to observe and that’s pretty special. There are some extremely talented, upright and moral people in this profession, who really want not just to make a living, but they want to do good and leave the profession a lot better than they found it – many of which have won this award.

To be in their company [as an award winner] … maybe some of us don’t feel deserving of it, especially for me, I’m not sure that I fit that category, but I’m honored that they [the Arkansas Pharmacists’ Association] did.

This is just not something I have ever thought of before, but it certainly is an honor and the approval should be counted as such. Those others that I hold in such high esteem and look up to – and always have – that’s quite an honor.”
Previous recipients of the Pharmacist of the Year Award include: 2014 – Lynn Crouse, 2013 – Carl Collier, 2012 – Charles Born, and 2011 – Don Johnson.

A positive attitude goes a long way, according to Padgett.

“I think it basically reflects that I am very thankful for what we have, even though there is a lot of things out there I could have done to make more money, but I am so appreciative and thankful for what we have and basically how this career choice has turned out. I was working as a chemist for five years, and changed careers in mid-stream, and I had a lot of anxiety about all that, but it’s been great.

It has allowed Mary the freedom to do a lot – she volunteers more than I do – I just try to help her out when she needs help … it has allowed us to do those sorts of things, and its all because of what we do, it’s just given us the opportunity to do a lot of other stuff besides just work. And that makes the work a lot more fulfilling.”

Faith is a big part of Padgett’s driving force.

“It certainly hasn’t been an overnight thing, it’s been a journey from day one, and I keep wondering why God’s taking so long to fix me, but it’s kinda up to him and there’s not much I can do about that.

I’d really like people to know that I’m certainly not perfect, and I don’t do everything right. And, it’s not because I don’t try. But, if there is some way I could help – they don’t have to be my customer or anything like that – if I can help them in some way, let me know. I would want everyone to know how appreciative I am of what they have made and allowed me and my family to come be a part of. I can’t imagine another community in the state – I am sure there are lots of nice communities – but I can’t imagine being anywhere else. I think there was a reason God put us here, or God led us here, and I am appreciative and thankful for that.

When people ask how I am doing, I just tell them that I wake up in paradise every morning.”

The Arkansas Pharmacists Association, founded in 1882, is the statewide professional association representing approximately 2,200 pharmacists in Arkansas. APA strives to further the professional advancement of pharmacists, advocate the value of pharmacy, and safeguard the health and well-being of every Arkansan. Its mission is to advance a professional and business environment for Arkansas pharmacists to be successful and fulfilled in serving patients.