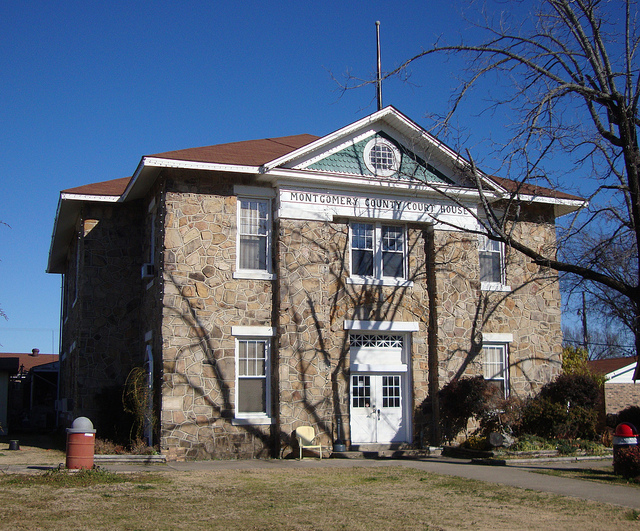 DERWOOD BRETT
A request by the Sims Volunteer Fire Department (SVFD) to have annual fire department dues added to the tax bills for residents in the Sims VFD’s service area was tabled following a lengthy discussion at the at the Montgomery County Quorum Court’s  (MCQC) August meeting Monday night.
Addition of the fire dues was made possible this year following action by the state legislature during the past session.
According to the newly enacted state law, local quorum courts are directed to add VFD dues to tax statements in any fire district that makes a formal request to the local county. According to the legislation passed by the Arkansas Legislature, any fire district that turns in petitions signed by 50 percent plus one property owner in the affected VFD can request that the Quorum Court adopt a resolution requiring the County Assessor to add the amount of dues assessed to each property owner in the district.
Sims VFD collected the exact number of property owner signatures  and submitted a request to the county to follow procedure for adding the amount to tax statements in the Sims area. Following that submission, one person who signed the original request for adding dues to the county tax roll asked that his name be removed from the request, which dropped the number of signatures to exactly 50 per cent.
Prosecuting Attorney Andy Riner told the court that it is unclear after reading the legislation whether or not a person can remove a name from the request. He noted that the original legislation is not clear, but cautioned justices that if the name was removed the number of signatures requesting the county collect VFD dues would be too low.
He told the court that if the proper number of signatures are submitted, the legislature has mandated that the local court has no choice but to approve the request to add dues collection to local tax bills. In the event of a taxpayer objecting to the fee collection by non-payment of the assessment, a list must be furnished to the fire district who asked for placement of fire department dues on tax bills.
The legislation does not make clear whether the dues collections could lead to confiscation of personal property. Some information furnished at a public meeting said the dues payment was voluntary and a patron could refuse to pay. However, Riner told the court that a resident whose tax bill is included in a mortgage payment would not have that same latitude. The mortgage company would pay the dues and would then expect repayment from the property owner.
Apparently, the legislature’s action makes payment of the dues mandatory rather than voluntary.
Montgomery County Quorum Court voted to adopt an updated personnel policy following a recommendation by County Judge Sammy Jones.
Judge Jones said the updated policy had been approved by Andy Riner, prosecuting attorney who serves as legal advisor for the county. The handbook was also approved by representatives of the Arkansas Department of Risk Management.
Several routine budget amendments were passed by the court:
A transfer of $5,999.38 was moved from County General to the County Judge’s Office budget to pay salaries and benefits;
The 18th West Judicial District Drug Task Grant Fund transferred  $23,553.92 to the 18th West Judicial District Drug Task Force budget. The funds became available through a grant from the State Drug Crime Enforcement and Prosecution Fund Grant designated to fund an investigator;
Funds were appropriated to the Kimzey Water System in the amount of $1,493.51 through a Community Development Block Grant;
The 2015 Sheriff’s budget was increased by $914.61 to help pay for meals and lodging and came from funds received from the Arkansas Department of Emergency Management.