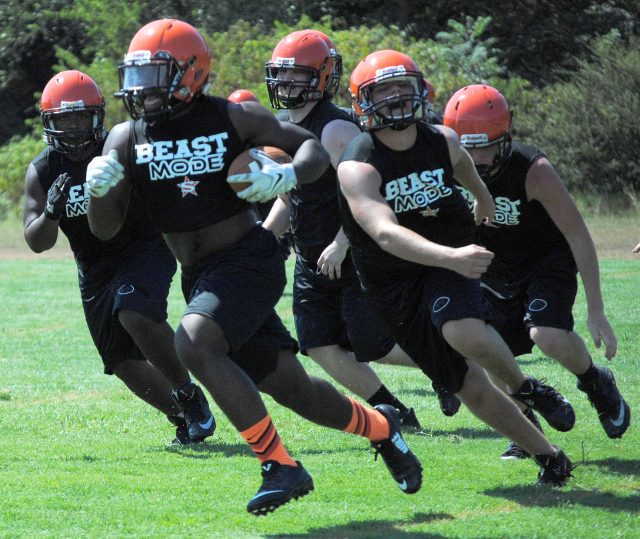 The team worked in the weight room and held a team meeting before hitting the practice field for a spirited two-hour practice.

“It was good to see them get out and run around a little,” Coach Mike Volarvich said.

The Scrappers worked in helmets the first two days of practice under Arkansas Activities Association guidelines.

Volarvich said the fast tempo of practice allowed the players to get in more reps.

“Today was about getting them out here and executing at the pace we want,” Volarvich said following practice. “We want them to get the fatigue out and play at a high level.”

Summer-time heat greeted the Scrappers on opening day after a slightly cooler weekend. Volarvich said players should “stop feeling sorry for themselves” because of the heat and fatigue. “We’ve got to block that out.”

The Scrappers’ summer conditioning program was good, according to Volarvich. “We’re a little stronger, a little better conditioned. We’re not where we want to be yet. That’s why we have camp. I tell the team that it’s not how you start but how you finish.”

The Scrappers’ schedule for the first week of practice was similar to what they followed Monday.

The team will have a scrimmage Saturday at 10 a.m. on the practice field.

“That will be the first day in full pads. I hope we see some improvement,” Volarvich said.

Nashville teachers will have inservice days part of next week, resulting in afternoon practices for the Scrappers.

A scrimmage will be held next week, with the time and date to be announced.

Media Day will be held Saturday, Aug. 15, at Scrapper Stadium.

The Scrapper Booster Club’s Orange and Black Back-to-School Bash will be Friday, Aug. 21.

The first game of the season will be Friday, Sept. 4, when the Scrappers host the Hope Bobcats. Kickoff is set for 7:30 p.m.