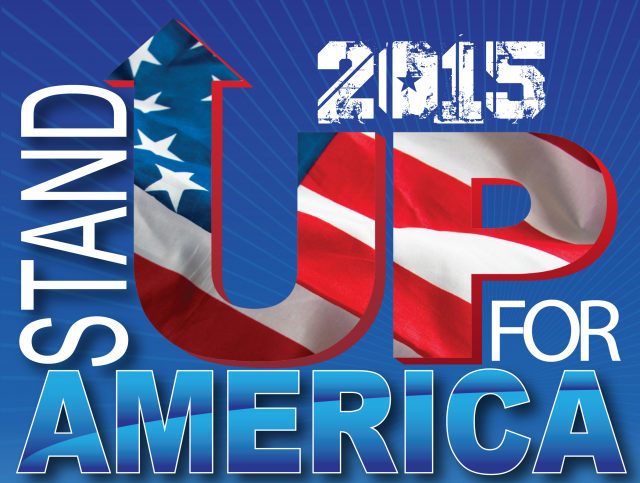 Performing at the 26th year of Stand-up for America, Michael Hicks will return for his second consecutive show in Nashville on July 4.

“The crowd loved it last year, and all I heard was how people wanted him to come back,” said Mike Reese, director of the Nashville Chamber of Commerce.

Gates open this Saturday at 5:30 p.m. At 6 p.m., local acts from the Nashville area will perform on the stage for close to 30 minutes.

The next hour of the event will be the patriotic part of the show, which Reese says is the “focus of the show.”

At 7:30 p.m., Michael Hicks and the Holla Band will perform, featuring Hick’s entertaining musical variety with music from the 1960s to the 1990s.

“He is something different. The variety is key. He was naturally born with a four-octave voice, which means he can sing a wide-variety of pitches which allows him more things he can sing,” Reese said.

Hicks, who has been entertaining crowds for more than 15 years, has played with well-known artists such as Cher, Brett Michaels and Willie Nelson. He is from Dallas, Texas, but performs almost daily all over the country. He plays many shows in northeast Texas, which Reese says, has attracted more than a few followers of Hix’s music. Reese said that he expects to see a large crowd on-hand for the event this Saturday.

“Young energy plays well with a crowd and he gets out there and participates with the crowd and that really entertains a lot of people,” Reese said.

The Nashville Chamber of Commerce will host a full-concession stand at the event, along with a side-vendor that will be serving sno-cones. Reese said that if anyone from the community would like to host their own vendor, they are welcome to as long as they serve something besides what the chamber vending is serving.

“If you can vend beyond what we are vending, we will consider it,” Reese said. “Contact us at the chamber before Friday at 3 p.m.”

The fireworks display, marked by Reese at approximately 30 minutes of running time, will begin about 9:30 p.m. During that time, Hix and his band will perform “God Bless the U.S.A.,” originally produced and performed by Lee Greenwood.

“We should be proud of our country and that we still have privileges based upon the founding of our country,” Reese said. “God Bless the U.S.A.”

“Stand Up For America” will begin at 5:30 p.m. when the gates to the Nashville City Park open. Tickets for the event are $5 for general admission and $10 for special seating. For more information on the event, contact Reese or the Nashville Chamber of Commerce at (870) 845-1262.