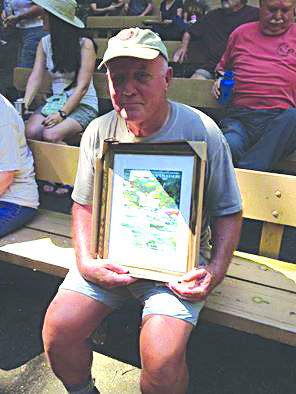 DERWOOD BRETT
Robert Cavanaugh, a local long-time hiking/biking enthusiast, received the 2015 Trail Advocate of the Year award at a ceremony July 17-19 at Blanchard Springs Recreation Area near Mountain View.
Cavanaugh was recognized for his long tenure as a member of Friends of the Ouachita Trail (FoOT). He was also involved in the layout, design, and actual construction of the Lake Ouachita Vista Trail (LOViT), which was recently named an IMBA Epic by the International Mountain Bike Association. There are now two Epic trails in Montgomery County–the LOViT and Womble trails share the designation.
Ronald Norris, a USFS employee working out of the Oden Work Center, got the Professional of the Year Award at the same meeting.
The LOViT was funded through grants and volunteer contributions and work completed largely by a group of citizens who call themselves the Trail Dogs. Cavanaugh has been an active participant in the organization’s activities since coming to the county.
He is one of the sponsors and major supporters of the annual Ouachita Challenge, a bicycle race that brings participants from throughout the United States. The 60-mile endurance race uses the Womble Trail.

Cavanaugh, who retired to Montgomery County several years ago, is involved in a number of community activities. He serves on the board of directors of Front Porch, a group who furnishes entertainment each week on the courthouse square in Mount Ida.
In addition, he is a member of the Friends of Lake Ouachita, where he has played an important advisory role with the U.S. Army Corps of Engineers. The group’s input helps guide management actions that take place on Lake Ouachita.
“The Arkansas Trails Council provides a unifying voice for the trails community across Arkansas,” according to a news release announcing this year’s awards. “The organization brings together people and resources with an interest in the development, expansion, use and maintenance of trails in Arkansas.
“The ATC promotes trail awareness, trail usage, and trail education, while serving as a proactive advocate for development and use of trails in Arkansas,” the news release noted.