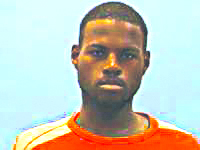 NASHVILLE – A chase through multiple counties, ending in a single gunshot, resulted in the arrest of a Hope man on multiple felony charges.
According to a statement released by Howard County Sheriff Bryan McJunkins, Nashville police officer Chris “Droopy” Gates attempted to stop a green Ford Explorer for driving on the wrong side of the road on the Highway 27 Bypass at approximately 3:30 a.m. Wednesday morning. The vehicle allegedly did not come to a stop after Gates activated his cruiser’s blue lights, but continued through the city’s streets. The Explorer is reported as eventually stopping on Elm Street, but continuing on as Gates exited his cruiser to approach the vehicle.
Officer Aaron Quick joined the pursuit as the SUV continued through the city streets toward Highway 27 North, and there on in the direction of Murfreesboro, approaching speeds of 80 miles per hour, according to the sheriff’s statement. Howard County deputy Dustin Wakefield is noted as having joined the pursuit near the junction of Highway 27 and Highway 26, making his way ahead of the fleeing vehicle to deploy a spike strip near the city limits of Murfreesboro.
The Explorer is reported as having turned off Highway 27 before the spike strip, into the driveway of the Tyson Foods hatchery.
The vehicle then allegedly circled around the hatchery facility with Gates and Quick in pursuit, heading back toward the highway.
Wakefield reportedly pulled his vehicle onto the driveway to prevent the Ford from re-entering the highway and exited his patrol unit as the vehicle continued toward him. The sheriff’s statement goes on to say that the suspect vehicle accelerated toward Wakefield, whereupon he drew his sidearm and fired a single shot to deflate the front passenger tire of the SUV.
Gates and Quick were able to then apprehend the driver, LeCorey Conway, 25, of Hope, and detain the passenger, Tamika McLaughlin, 35, of Nashville, for questioning. McLaughlin is alleged to have stated to officers that she had attempted to flee the vehicle when Conway had stopped in Nashville, but that Conway had prevented her leaving the Explorer before fleeing.
Conway was arrested on charges of fleeing in a motor vehicle and false imprisonment, both felonies, as well as various misdemeanor violations. The suspect is being held at the Howard County jail on $50,000 bond.