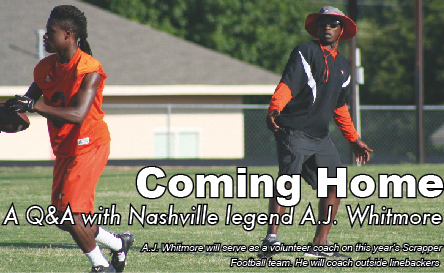 Leader Reporter Dixon Land caught up with former Nashville Quarterback A.J. Whitmore, who will serve as volunteer coach this fall, helping Coach Brad Cheshire with linebackers. A.J. is a two-time state champion with the Scrappers and played football at Tulsa for three years after graduating Nashville High School.

AJ: “It’s a feeling that you can’t simulate. Everything about the town is so much tradition and pride that you don’t have any choice when you grow up as a kid, but know you are going to be a Scrapper and that’s all you think about doing and that’s built into the program. So that kinda atmosphere makes you go from being an average player to a great player and these facilities are so nice and it’s everything a high school kid would want to play at, so you kinda just cherish the moment of being back in it.”

DL: So we talked a little bit about that, when did you graduate?

DL: Ok, so you were on that three-peat team?

AJ: “Actually I was on that re-peat team and the class behind us kinda finished it off. I still kept in touch with a lot of those guys and it was still a great sign of tradition when people leave and the team still wins. We kinda got spoiled with a run of three. It’s just one thing that can never be taken from you and it’s one thing that you will never live down-to go out your senior year with a championship.”

DL: I talked to Reeder McCullough, the barber in town, and he said that you could have told the defense what play you were running and they still couldn’t stop you. Any comment?

AJ: “I can say that if it’s coming from Mr. McCullough, it’s a pretty accurate statement. He’s seen a lot of great players come through here and one thing about him was that he’s always here to support us and that’s just a great example of how tradition-rich it is around here. You have a guy that’s been in the community over 70+ years and attend every football game and tell you everything about the history of the program.“

DL: After Nashville, what did you do between then and now. Connect the dots.

AJ: “After Nashville, I went to Tulsa and played there for three years and had a pretty good career there. I sat out my last year of college and transferred to Arkansas Tech and finished up my senior year there and from there, went there to Louisiana and me and [Coach Brad] Chesshir hooked up again. Played him in college at Tech and we kinda just talked about it and then went down to Louisiana and that’s when we got into coaching high school football together and I took a year off to kinda see if that’s really what I want to do. Now I’ve got my mind right, and I’m back here coaching with Chesshir, [Coach] D.J. [Graham], [Coach Brian] Bearden – guys that have been around in high school with and now you get a chance to coach with.”

DL: So what do you think of Coach V?

AJ: “I like Coach V; he’s a very laid-back guy. He’s a great offensive mind, and he knows how to relate to the kids well. Offense this year is real good and real talented, and he gets to expose the players for who they are and how talented they are. He’s built a great program so far. He comes to practice everyday with a great attitude and proves to the kids every day that it’s a pretty good deal to get to play football.”

DL: This fall, you are back in Scrapper Orange. Hype? Anticipation?

AJ: “It’s a good feeling to get to do what you love, back home. It feels kinda different, but you know the pressure is on because you know how serious it is and it’s good to be in a tradition-rich town, like I said. I’m learning a new side of the ball this year and I’m excited and I think we are going to be talented in whatever we do. Either that’s coaching kickers or special teams or whatever for the team, that just means a lot to get a chance to come back home and take part in that.“