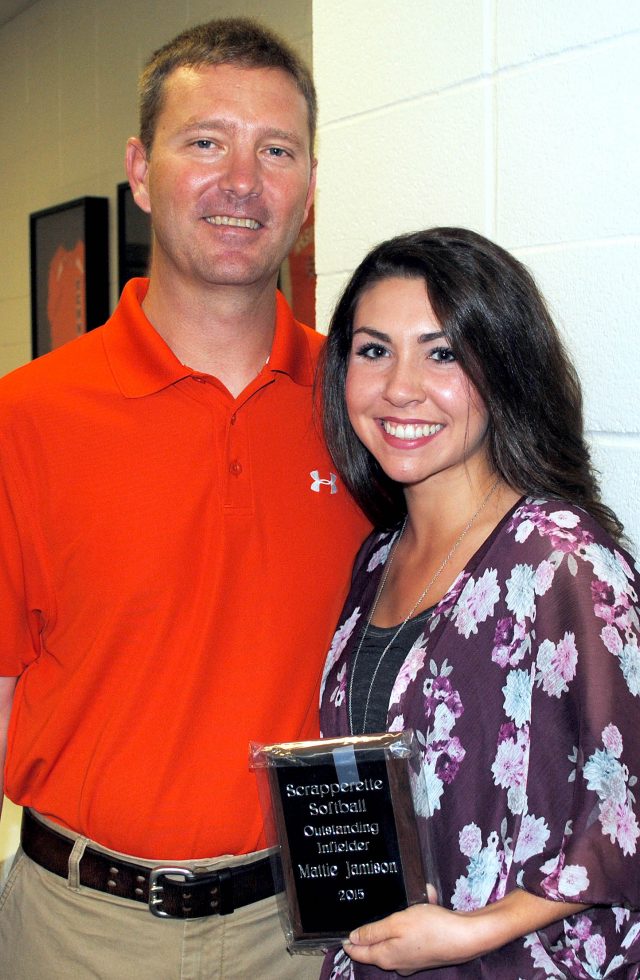 Coach Paul Ernest presented the award, which is named in memory of Spradlin, a Scrapperette softball player who was killed in an automobile accident June 22, 2009. Her teammates dedicated the 2010 season to her, and “Play for Cait” became their motto.

The award was among a number of honors presented during the banquet, which recognized the Scrapperettes for a season which saw them advance to the state Class 4A semifinals.

Other award winners included the following:

The Scrapperettes presented gifts to Coaches Ernest, Phillip Miller and James Reed, including a memory album for each coach and team photos for each coach.

Ernest returned to Nashville for the banquet. He was hired as head football coach at Gentry earlier in the year but stayed in Nashville to coach the Scrapperettes throughout their season. He reported to Gentry for spring practice after the conclusion of the softball season.

Athletic Director James “Bunch” Nichols said Ernest was brought to Nashville from Horatio to coach football and baseball. “He did a great job. I had a son who played baseball for him. The guys hated to lost him” when he moved to softball for the 2013 season.

“Anything I’ve been able to do is 100 percent because of the kids of this community,” Ernest said. Being a Scrapperette changed my whole perception of what this profession is about. I was very fortunate to get the benefit of what people in this room did with their daughters. We have parents who want to give you every opportunity to succeed. Look at National Honor Society. Look at the honor roll. Look at other sports. The females in our school are well represented on this team. I’ll try to take a little bit of the Scrapperettes to Northwest Arkansas.”

Ernest thanked volunteer coaches Reed and Miller for their help. “We worked together well. Coach Miller is the epitome of calm. Coach Reed is the kindest man I’ve been around. I’ve learned more from these two about how to coach and how to handle people. They are two phenomenal men. I’m very blessed to have had them as part of my life the last three years.”