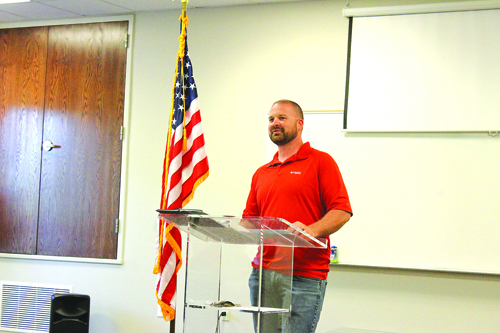 NASHVILLE – The Howard County Republican party met at UA Cossatot Tuesday and heard from special guest speaker, District 19 State Representative Justin Gonzales.
Gonzales spoke about the goings on at the capitol and took questions from the crowd on a range of topics. He began with information about Lockheed Martin and said that the state of Arkansas has approved a bond issue that would provide $87 million dollars to the company in an effort to bring jobs to the Camden area.
“This was something completely different than your standard corporate welfare type thing, this was a military contract that was being given to one of three companies one of which was Lockheed Martin,” Gonzales explained. “This will be in no direct competition with any other businesses in the state. Second of all, this is not a startup company. Lockheed Martin has been in the defense industry for a very long time and there were stipulations that they had to meet over this 25 year contract or they would have to pay the money back to the state.”
Gonzales went into to detail about the stipulations, which he said include a requirement to retain around 530-540 jobs and create 587 new jobs at a median starting salary of $45,000 a year. He said the state will know by the end of July or beginning of August if they get the contract.
The representative then went onto elaborate about the new law that is in effect moving the state’s primary elections from May 20 to March 1, which also moves the filing period to November. Gonzales said that starting this year candidates running for office should contact their local courthouses for filing information and that if anybody is planning on running for office they should get in touch with county officials soon.
“The main point of moving the primary is so that Arkansas can have more input in the presidential elections,” he said.
Other subjects Gonzales touched on included the recently recommended ousting of Parcc Assessment in favor for the ACT Aspire test.
“It would make more sense to use the ACT Aspire test instead because it is what is used to get into colleges nationwide,” Gonzales stated.
Gonzales also spoke about a new push for restructuring Medicare and making cuts and finding ways to eliminate waste in the program.
In unrelated business, the meeting began with talk of the group’s budget and balance that has now grown to $1055.55 and recognition of the two new members to the now 38 up to date paid members of the group.
The meeting ended with more questions than answers about the state’s status on the open carry of firearms and Gonzales said that is the reason that law should be looked at again because a person should not have questions about what is and is not legal about a certain law.
The Howard County Republican Party will meet again next month and look to discuss more topics facing the party, the county and the state.