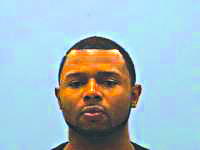 NASHVILLE – An undercover investigation and a subsequent high speed chase led to the arrest of three area men on drug charges Friday.
According to city narcotics investigator Mark Barnes, local police and members of the Arkansas State Police executed a search warrant on an Aylett St. residence that morning, discovering assorted paraphernalia believed to be related to the consumption and sale of methamphetamine.
Barnes said the residents of the home, 34 year old Christopher Buiel Linville and 50 year old David Claren Bentley, were taken into custody after police seized pipes, syringes, digital scales and spoons with suspected methamphetamine residue on them from the home. Linville faces a single count of misdemeanor possession of drug paraphernalia, while Bentley has been charged with two felony counts of delivering a controlled substance and two felony counts of distribution near certain facilities.
Later Friday afternoon, Barnes said the same investigation yielded information suggesting that 35 year old Prince Demongo Thomas, of Hope, would be transporting more contraband from his city of residence into Nashville. Just before 4 p.m., officers attempted to conduct a traffic stop on the vehicle, a 2007 Chrysler 300, at the Quick Draw convenience store on the Highway 27 bypass, but the suspect allegedly fled south at speeds nearing 90 miles per hour.
“During the chase … Thomas was observed throwing suspected methamphetamine out of the window of the car,” Barnes said.
According to Barnes, the chase eventually ended south of Nashville near Midway, where Thomas was arrested without incident, and officers were able to recover two bags which had been ripped open but still contained “quite a bit” of methamphetamine residue. Officers discovered more of the controlled substance in the vehicle’s floorboards, according to police reports.
As a result of the incident, Thomas faces charges of possession of methamphetamine with purpose to deliver, tampering with physical evidence and felony fleeing.
Both he and Bentley remain inmates at Howard County Jail on separate $100,000 bonds.
Law enforcement involved in both of the incidents included Barnes, Ty Basiliere, Greg Parker, Casey Parker, Randy Bohn, Wayne Epperly, Keith Philamlee, Chief Dale Pierce and ASP officer Chris Short.