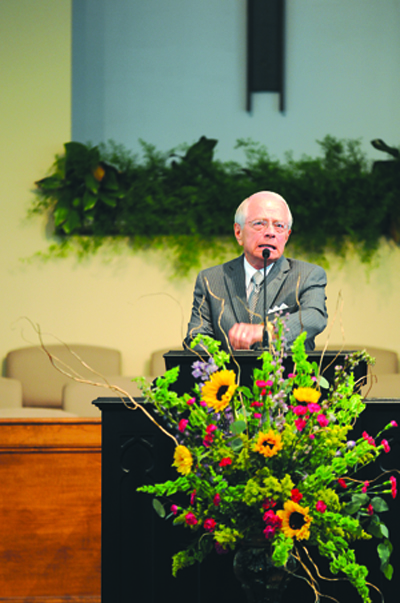 NASHVILLE – More than 150 were on hand for the celebration of Immanuel Baptist Church’s 90th anniversary Sunday morning.
While the congregation was addressed by current and former pastors, music leaders and youth ministers, they gathered in those who had been part of their church family for generations, in some cases having joined when the church was housed in the aggregate rock structure on Front St. in Nashville, and in one case remembering even the clapboard structure where the congregation first met nine decades ago.
The crowd heard testimonials from those who had been worshiping at Immanuel the longest, sharing memories of coon dinners in the basement of the church building assembled from aggregate that congregants gathered a rock at a time from around Umpire, or Sunday school classes in an upper room of an outbuilding, of building a new home in 1972, where they are still located.
The group was also addressed by local state senator Larry Teague, who passed on the congratulations of the local Methodist church and read out a proclamation of recognition from the Arkansas Senate noting the occasion.
The church also welcomed back Glen Green, the longest serving pastor of Immanuel, who had preached there from 1985 to 2009 for his message. He preached on Philippians 3:10-13, urging the group to reach forth unto those things which are before.
The congregation also gathered in fellowship for a meal afterward, showing the strong ties that will assure their coming together for another 90 years.